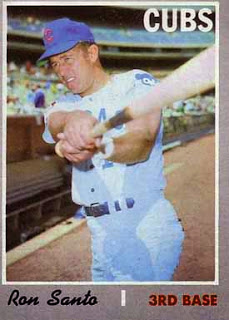 ~Ron Santo 1940–2010 (Cubs 1960-1973, Cubs announcer 1990-2010)
He was the captain of that ill-fated (but incredibly talented) 1969 Cubs team–the man who clicked his heels after each Cubs victory. Santo was also the one who had the black cat cross his path while he stood in the on-deck circle in New York. Ron Santo is a Hall of Famer, something he wanted to be more than anything else in the world. Unfortunately, he wasn’t inducted until after his death. His credentials should never have been questioned. Santo was a nine-time All-Star and five-time Gold Glover at third base. He hit 342 homers, and was the dominant player at his position (in the National League) during his playing days. And he did it all despite suffering from diabetes. After his playing career he joined the Cubs radio broadcast booth, teaming up with the great Pat Hughes. He lost both legs to diabetes during his broadcasting days, and made an even stronger bond with Cub fans. He never complained about his medical misfortune, and he exhibited the same kind of raw emotion that Cub fans experienced: Incredible joy when they won, and pure agony when they lost. His number was retired in 2003 and a #10 flag now flies on the left field foul pole at Wrigley Field. (PHoto: Topps 1970 Baseball Card)

~Felix Pena 1990– (Cubs 2016)
The hard throwing Dominican right hander came up through the Cubs system and made his big league debut during their World Series championship season. He was recalled from Iowa in August and actually pitched some meaningful innings for the Cubs during the home stretch.

~Monte Irvin 1919–2016 (Cubs 1956)
Irvin was nicknamed “Mr. Murder” for the way he murdered the baseball. He was a star in the Negro Leagues and didn’t make his debut in the Majors until 1949 at the age of 30. But even though he only played a few big league seasons and hit only 99 career homers, he was inducted into the Hall of Fame in 1973. He had a few great seasons with the Giants, leading them to the National Leauge pennant in 1951, and the World Series championship in 1954. When the Cubs got him in 1956, he was already 37 years old. His power stroke was diminished, but he was still the best leftfielder in the league. In his last big league season he led the National League in fielding percentage and range. When he died in 2016 he was the oldest living major leaguer.

~Jorge Soler 1992– (Cubs 2014-2016)
Soler was signed after he defected from Cuba. He had a rough start in the minors and had trouble staying healthy, but he put it all together in 2014. At each step of the minors he dominated, until he was brought all the way up to the big leagues. In his first at bat with the Cubs, Soler hit a homer (against Mat Latos). He finished the year as the club’s starting right fielder. He battled through more injuries in 2015, but when the playoffs arrived, so did Jorge. He hit an astounding .474 in the postseason and slugged three homers. At one point he reached base a record nine consecutive times. The injury bug bit him again 2016, and he missed quite a bit of time. He did hit 12 homers, but he was really a non-factor in the Cubs World Series run.

~Howard Earl 1869–1916 (Colts 1890)
They called him “Slim Jim” because he was a tall and lanky infielder. He played first, second, and third base for the second place team. Hall of Famer Cap Anson was his manager during his only year in Chicago.

~Bob Brenly 1954– (Cubs announcer 2005-2012)
He was a former big league ballplayer (Giants, Blue Jays) and World Series winning manager (Diamondbacks) before joining the Cubs television booth. Brenly and Len Kasper formed a great team during their years together. Brenly was known for his tough criticism of certain players (especially Alfonso Soriano), and he and Kasper often also riffed about rock and roll (and even played together on stage at the House of Blues every year before the Cubs convention). He left the Cubs booth after the 2012 season when the Arizona Diamondbacks offered him a chance to broadcast the games of the team he took to the championship.

~Ed Lynch 1956– (Cubs 1986-87, Cubs GM 1994-2000)
Lynch was a journeyman starter for the Mets in his seventh big league season when the Cubs acquired him in June of 1986. The Mets would go on to the win the World Series without Ed, while the Cubs finished in 5th place. After a year and a half with the Cubs, Lynch retired. He worked in management with the Padres for a while before being named the General Manager of the Cubs in 1994 by team president Andy McPhail. He made some good trades (acquiring Henry Rodriguez) and some bad trades (trading Jon Garland for Matt Karchner), but he was mainly let go because the Cubs only reached the post season one time during Lynch’s years at the helm. He’s currently working as a scout for the Toronto Blue Jays.

~Henry Rodriguez 1987– (Cubs 2013)
Not to be confused with the Henry Rodriguez who played left field for the Cubs in the late 90s, this Henry Rodriguez (no relation) is a pitcher with a dynamite fastball. Unfortunately, he can’t control it. In his five big league seasons (through 2013), he has 36 wild pitches in only 148 innings pitched. He signed with the Miami Marlins in 2014. 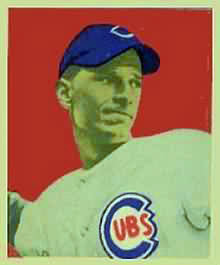 ~Andy Pafko 1929–2013 (Cubs 1943-1951)
Nicknamed “Handy Andy,” because of his incredibly dependable hitting and fielding, Pafko was one of the most popular Cubs, and a star of their last World Series team of 1945. “Handy Andy” was a five-time all-star during his Cubs career, the first three times as an outfielder (although one of those times, 1945, they didn’t play the all-star game because of the war). After legendary Cubs’ third baseman Stan Hack retired after the 1947 season, Pafko replaced him on the hot corner long enough to be named an All-Star there too, making him one of the few people to achieve All-Star status in both the infield and outfield. His 1950 season can only be described as “DiMaggio-esque”. That year Andy Pafko knocked the ball out of National League ballparks 36 times while only striking out 32 times. Only 14 players have ever accomplished that feat. Pafko’s 1950 season was so impressive that Reds’ president Warren Giles said if he could choose any player in the National League to help improve his team, he would choose Pafko. Naturally, Handy Andy was rewarded for that incredible season in true Cubs fashion. He was traded to the Brooklyn Dodgers. He was crushed when the Cubs traded him, and it was a trade that Chicago would forever regret. The players they got in return had almost no impact with the Cubs, while Pafko would go on to play in the 1952 World Series with the Dodgers and the 1957 and 1958 World Series with the Braves. He came back to his hometown of Chicago after his playing career was over, settling in the northwestern suburbs, and passed away in 2013 at the age of 92. (Photo: Bowman 1949 Baseball Card)