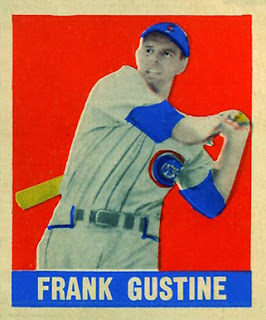 ~Frank Gustine 1920–1991 (Cubs 1949)
Frank was coming off three consecutive all-star seasons when he arrived in Chicago in December of 1948. The Hoopeston Illinois native was probably excited to be playing for the Cubs after spending the previous ten seasons with the Pirates. (His roommate on the road with the Pirates was Hall of Famer Ralph Kiner). Unfortunately, it didn’t quite work out for Frank in Chicago. He split time at third base with Bob Ramazzotti, and neither of them hit well. Gustine hit only .226, and was released before the season was over. He resurfaced briefly with the St. Louis Browns the following season, but that was the end of his big league career. (Photo: 1948 Leaf Baseball Card)

~Jesus Figuero, 1957– (Cubs 1980)
The Dominican outfielder played for the Cubs one year, his only season in the big leagues. The Cubs used him mainly as a pinch hitter that season. He was a contact hitter with a good eye, but didn’t really have the power necessary to stick in the majors as a corner outfielder. The Cubs traded him after the season (along with Jerry Martin) to the Giants, and he couldn’t crack the roster there. The Giants had a stacked outfield that included Larry Herndon, Jack Clark, Bill North, and Jeff Leonard.

~Spencer Patton 1988– (Cubs 2016)
The Urbana-born Patton, a former Texas Ranger, pitched out of the bullpen for a few different stints during the 2016 season. Unfortunately he couldn’t find his control. In only 21 innings pitched, he walked 14 men, which sealed his fate. After the season the Cubs released him.

~Ryan Sweeney, 1985– (Cubs 2013-2014)
Sweeney was a high draft pick of the White Sox, but he has travelled around quite a bit since he was drafted. The Sox traded him to the A’s as part of the Nick Swisher deal, then the A’s traded him to the Red Sox in the Josh Reddick deal. The Cubs signed him as a free agent just before the 2013 season. He probably would have started the whole season in centerfield, but he was injured. The Cubs signed him to a two-year deal before the 2014 season, but released him after spring training 2015

~Julio Borbon, 1986– (Cubs 2013)
He stole 19 bases in only 46 games as a rookie with the Rangers in 2009, and it appeared he was going to be a big star. But Borbon was undisciplined at the plate and couldn’t get on base enough to take advantage of his speed. The Cubs claimed him off waivers in 2013 and he had a few good moments, but he was abruptly released in August when he angered manager Dale Sveum with a boneheaded play on the basepaths.