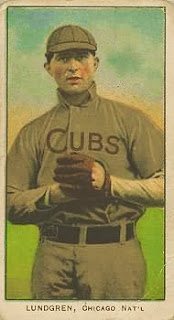 ~Carl Lundgren 1880–1934 (Cubs 1902-1909)
Lundgren pitched for three Cubs pennant winners (1906, 1907, & 1908). Even though he was a great pitcher, he never pitched in the World Series during those pennant winning seasons because there were even better pitchers on the team (like Mordecai Brown, Orval Overall, and big Ed Reulbach). Lundgren was especially effective early in the season in cold weather, which led to his nickname “The Human Icicle.” He won 17 games for the ’06 pennant winners and 18 games for the ’07 champs (with an unbelievable ERA of only 1.17 for the season), but slumped in ’08 and managed to only win 6 games. After the next season his career was over.

Lundgren’s teammates didn’t just think of him of as their fifth or (sometimes) sixth starter. He was a shrewd baseball man; just as valuable on the bench as he was on the field. Lundgren later went on to succeed Branch Rickey as the baseball coach at the University of Michigan, before ending his career in his dream job, as the coach of his alma mater, the University of Illinois.

~Ed Schorr 1892–1969 (Cubs 1915)
He only pitched in two games for the 1915 Cubs (in the last homestand of their final season at West Side Grounds), but one of them was in Grover Cleveland Alexander’s 30th win of the season. Schorr pitched the final two innings in relief of Cubs starter Karl Adams.

~Ray Harrell 1912–1984 (Cubs 1939)
The Cubs got Harrell in the off-season after their World Series loss to the Yankees, and had high hopes for him. Ray pitched horribly (8.31 ERA) however, so they included him in the trade that brought Claude Passeau to the Cubs. That turned out to be a great trade for Chicago as Passeau anchored their rotation for several years, including their 1945 pennant season.

~Don Eaddy 1934–2008 (Cubs 1959)
Eaddy was a great athlete. He starred in three different sports at the University of Michigan (baseball, football, and basketball). The Cubs signed him just before he was drafted by Uncle Sam. Don had to serve in the Air Force for three years. When he finally returned to baseball, the Cubs brought him up to the big leagues to use him as a pinch runner. He got into fifteen games in that capacity, but only got into one game as a position player. On August 1, 1959, he came in to play third base. Two balls were hit to him and he made an error on one of them. He also got his only big league at bat in that game. He struck out. They never let him hit or field again. After his playing career he became a franchisee for Burger King.

~Don Landrum 1936–2003 (Cubs 1962-1965)
Landrum was mostly a backup outfielder during his big league career, but he did get some extensive playing time with the Cubs in his final season with the club. Unfortunately, he only hit .226. But he served the Cubs well because he was included in a trade (along with Lindy McDaniel) that brought two important players to Chicago–Randy Hundley and Bill Hands. That remains one of the best trades the Cubs ever made.

~Mike Hubbard 1971– (Cubs 1995-1997)
Mike was the Cubs backup catcher behind Scott Servais for three seasons in the 90s. He also served as a backup for Montreal, Texas, and Atlanta.

~Barry Foote 1952– (Cubs 1979-1981)
Barry Foote hit sixteen home runs as the Cubs everyday catcher in 1979. Foote didn’t have a great relationship with Cubs manager Herman Franks. When Franks (a World War II vet) resigned at the end of the 1979 season, he specifally called out Foote (along with Ted Sizemore, Bill Buckner, and Mike Vail) as a “whiner”. The following year he became a part time catcher, and the season after that he was traded to the Yankees.

~Sergio Mitre 1981– (Cubs 2003-2005)
He was one of the better starting pitchers in the Cubs organization at a time when they had a stacked pitching rotation. Luckily for Sergio, the Cubs pitchers kept getting injured. He started 18 games over three seasons, and didn’t have a tremendous amount of success, so the Cubs included him in the trade that landed Juan Pierre. Sergio stayed in the majors until 2011, and even pitched in the 2010 ALCS for the Yankees, but his lifetime record is 13-30.

~Eduardo Sanchez 1989– (Cubs 2013)
The young Venezuelan got a cup of coffee with the Cubs in 2013, but he had control problems in his limited appearances. They let him go at the end of the season, and he signed with Detroit.