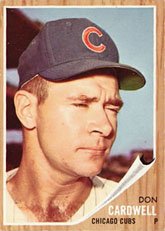 ~Don Cardwell 1935 (Cubs 1960-1962)
The Cubs acquired Cardwell from the Phillies in exchange for second baseman Tony Taylor. Taylor went on to play big league ball for 16 more seasons, but it looked like a great trade at the time. On May 15, 1960, in his first start in a Cubs uniform, Don Cardwell pitched a no-hitter. He won 15 games for the Cubs the following year, but fell off in 1962, and was traded to the Pirates after the season. In return the Cubs got future 20-game winner Larry Jackson (among others). Jackson was later the key part of the trade that allowed the Cubs to acquire Ferguson Jenkins. After leaving Chicago, Cardwell pitched for the 1969 Mets team that broke his former team’s heart. (Photo: Topps 1962 Baseball Card)

~Kyle Hendricks 1989– (Cubs 2014-present)
The Cubs acquired Hendricks in the trade that sent Ryan Dempster to the Texas Rangers. The youngster quickly worked his way through the Cubs minor league system, and made his debut in 2014. He was outstanding as a rookie, going 7-2 with a 2.46 ERA in 13 starts. Hendricks finished in seventh in the Rookie of the Year voting despite not being called up to the big leagues until July. In 2015, he was a member of the rotation for the entire season, and posted a record of 8-7, with a 3.95 ERA, in 32 starts. But in 2016, Hendricks became a star. He led the league in ERA, won 16 games, won the clinching game that brought the Cubs to their first World Series since 1945, and started Game 7 of the World Series. He finished third in the Cy Young voting. An injury in 2017 slowed his progress, but Kyle still managed to win a crucial Game 1 vs. the Nationals in the NLDS. In 2018 it appeared he was having an off-year, but when the dust settled he had won 14 games, posted a 3.44 ERA, and pitched just shy of 200 innings. His 2019 season was nearly identical. Thanks to his attention to detail, and study of his opponents, Kyle remains one of the most consistent right-handed pitchers in baseball. There’s a reason his teammates call him the Professor.

~Don Johnson 1911 (Cubs 1943-1948)
Johnson was the starting second baseman for the pennant winning Cubs team in 1945. He was an energetic infielder, and his teammates called him “Pep.” Johnson was a young phenom in the minor league system, and the Cubs thought so highly of his eventual development, they traded their Hall of Fame second sacker Billy Herman. Then, they traded the other second baseman on their team, future all-star Eddie Stanky, and gave the job to Johnson. In 1944, Johnson was an all-star himself, leading all 2B with 71 RBI. He also, unfortunately, committed 44 errors. Johnson had another all-star season with the bat in 1945, hitting .302, but after the players returned from the war in 1946, he was exposed as a liability. Johnson became a non-factor in 1947 and 1948 (his last season in the big leagues) while Eddie Stanky led two different teams to the NL pennant. Some Don Johnson trivia: His father Ernie also had a Chicago connection. He was signed by the Chicago White Sox to replace banned shortstop Swede Risberg after the Black Sox scandal, and remained in the big leagues for ten years. In 1925, exactly twenty years before his son would play in the World Series, Ernie Johnson played in the World Series for the New York Yankees.

~Ryan Theriot 1979 (Cubs 2005-2010)
Somewhere along the line someone noticed that if you split up the letters in Ryan Theriot’s last name, it spells “The Riot.” Cubs broadcasters started calling him that shortly after he was named starting shortstop, and it caught on. In his first two seasons as a starter, the Riot managed to do something that hadn’t been done since Joe Tinker did it exactly one hundred years earlier; start at shortstop for a Cubs playoff team in consecutive years. Theriot was a fan favorite because of his scrappy play, a media favorite because of his constant accessibility, and will always be remembered for his great nickname. After leaving the Cubs he won a World Series ring with the 2012 San Francisco Giants.

~Scot Thompson 1955 (Cubs 1978-1983)
Scot (with one “t”) was the 7th overall pick of the 1974 draft, ahead of future stars Gary Templeton, Lance Parrish, Willie Wilson and Rick Sutcliffe (all first rounders). At first Scot (with one “t”) appeared to be one of the rare non-busts in the Cubs farm system. In his rookie year he hit .289 and finished third in the Rookie of the Year voting. Unfortunately for the Cubs, he never again approached that level of production.

~Mark Freeman 1930 (Cubs 1960)
The 29-year-old got the most extended shot of his career with the Lou Boudreau-managed Cubs of 1960. He appeared in 30 games and posted an ERA of 5.63. It was also his last chance in the big leagues. The big righthander (6’4″) hung up his spikes after the Cubs cut him loose following the season.

~Jorge Comellas 1916 (Cubs 1945)
They called Jorge “Pancho” after the character in The Cisco Kid, a story by O’Henry. It was turned into a popular radio program in the 1940s, about a Mexican crime fighter in the Wild West and his trusty sidekick Pancho. At the end of each episode, Cisco would say “Oh Pancho” and Pancho would reply “Oh Cisco.” Jorge Comellas wasn’t Mexican, but in the politically incorrect 40s, he was close enough. He was a pitcher the Cubs signed out of Havana Cuba, and they had high hopes he could contribute in the 1945 season because he won 18 games with a 2.44 ERA for their minor league club in Los Angeles in 1944. Unfortunately, Comellas didn’t win a single game for the Cubs in seven appearances, and was hit pretty hard. At the end of May they sent him back to the minors, from which he never returned. His short stint on the 1945 Cubs comprises his entire major league career.

~Deacon White 1847 (White Stockings 1876)
White was just recently (2013) inducted into Baseball’s Hall of Fame. Deacon was one of the biggest stars in the first decade of professional baseball. He only played one season for the Cubs (then known as the White Stockings), but it was an important one–the first season of the National League (1876). White led the league that year in RBI. He also played for Buffalo, Dayton, Cleveland, Pittsburgh, and Boston in his 20-year career. He played every single position on the field, including pitcher. They called him Deacon because he was a devoted religious man. White vehemently believed the world was flat. (Not a joke)

~Jed Hoyer 1973 (Cubs GM 2011-Present)
Hoyer was brought in to be the general manager of the Cubs by his former colleague at the Red Sox, Theo Epstein. Hoyer came aboard after a successful stint as GM for the San Diego Padres. One of his first trades as the Cubs GM was acquiring a player he had drafted in Boston, and traded for in San Diego–first baseman Anthony Rizzo. He has since acquired several top level prospects in trade deadline deals, and helped lead the Cubs out of their long darkness. Theo gets all the credit, but Jed is his essential partner.