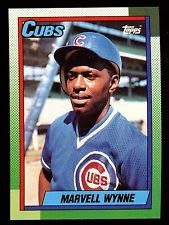 ~Marvell Wynne 1959 (Cubs 1989-1990)
The local Chicago kid (Hirsh High School) finally got his chance to play for his hometown Cubs when he was no longer a kid. He was 29 when the Cubs picked him up to provide some veteran presence down the stretch of the 1989 division race. Marvell played all three outfield positions for that team, and got a taste of the postseason for the first and only time of his career. He previously played for the Pirates and the Padres. After the 1990 season, he finished his career in Japan. Marvell’s son (Marvell Jr.) plays professional soccer in the MSL. (Photo: Topps 1990 Baseball Card)

~Juan Mateo 1982 (Cubs 2006)
Mateo was a starting pitcher from the Dominican Republic that threw the ball very hard. The Cubs gave him a shot in their rotation the last two months of the 2006 season, and he really struggled. His ERA was over 5, he walked too many men, and he didn’t pitch deep into games. He never got another chance in the big leagues. He pitched a few years in the minors, before moving to Mexico and pitching in the Mexican League.

~David Kelton 1979 (Cubs 2003-2004)
David was a second round pick of the Cubs, but he never really developed into the offensive force they projected. The outfielder had respectable, if not outstanding numbers in the minors, but only got two brief shots with the big club. In 22 at bats over two seasons, he got three hits.

~Wild Bill Hutchinson 1859 (White Stockings/Colts 1889-1895)
The Yale man was born the year before Abraham Lincoln was first elected, and didn’t pitch for Chicago until he was 29 years old. Wild Bill had his season to remember in 1892. He led the league in wins the previous 2 seasons as well (with 44 and 41), but in 1892, Hutchinson had the whole package. He started 70(!) games, completed 67 of those, and led the league in wins (36) and strikeouts (314). During the three years of 1890-1892, he pitched nearly 1800 innings, far and away the highest total in the league. Of course the rules were quite different in his era, but he was still one of the best pitchers in the league.