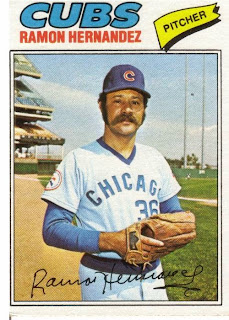 ~Ramon Hernandez 1940–2009 (Cubs 1968, 1976-1977)
Ramon was known for his herky-jerky deceptive delivery that worked like a charm while he was a member of the Pittsburgh Pirates, but not so much as a member of the Cubs. His lifetime ERA was 3.03, but those very good stats (including 46 career saves) mainly benefited our divisional rival Pittsburgh. In his two stints with the Cubs (1968 and 1976-77), Ramon pitched a grand total of 18 innings. In those 18 innings, he gave up 16 earned runs. But in a Cubs locker room stuffed to the gills with quality mustaches, the stash on the face of Ramon Hernandez took second place to no one. (Photo: Topps 1977 Baseball Card)

~Ray Mack 1916–1969 (Cubs 1947)
Mack had a chance to play in Wrigley Field years before he joined the Cubs because he was drafted by the Chicago Bears in 1938. He opted for baseball instead, and joined the Cleveland Indians organization. The second baseman saved Bob Feller’s Opening Day no-hitter with an incredible lunging catch in 1940 and made the All-Star team that season, but he was 30 when he joined the Cubs in September of 1947. It was the last gasp of his playing career. His son Tom chose football instead of baseball — and the Los Angeles Rams lineman made it into Pro Football’s Hall of Fame. Unfortunately Ray didn’t live to see it. He died of cancer at the age of 52.

~Duke Farrell 1866–1925 (White Stockings 1888-1889)
Duke came up with Cubs (then known as the White Stockings). He was known as a snappy dresser who enjoyed a good night out on the town, but he also could hit the baseball. Farrell had some power, hitting eleven homers in one of his Chicago seasons — a very high total for that time. Duke left the team during the player revolt of 1890 and had his greatest success in subsequent stints with Boston and Washington. One year with Boston he led the league in homers (12). The catcher/third baseman/outfielder played 18 seasons in the big leagues. He later also coached for the Yankees, Red Sox, and Braves.

~Boots Day 1947– (Cubs 1970)
If he had gone by his given name of Charles Day instead of using his childhood nickname, we probably wouldn’t remember the month-and-a-half that he was a member of the Cubs during the 1970 season. Boots wasn’t exactly one of the all-time great players, but he did kick around the majors for six seasons. The Cubs acquired him for pitcher Rich Nye, but he couldn’t crack the lineup often enough. They traded him just a month into the season to the Montreal Expos for backup catcher Jack Hiatt. Boots had a grand total of eight at-bats for the Cubs and got two hits.

~Ramon Webster 1942– (Cubs 1971)
The Cubs were the last stop on Webster’s five-year big league tour. The Panamanian outfielder/first baseman hit .313 in limited duty. His best season was probably his rookie year with the A’s (1967) when he slugged eleven homers. 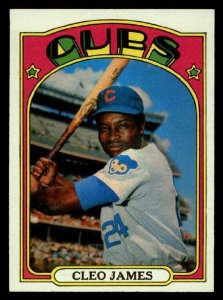 ~Cleo James 1940– (Cubs 1970-1973)
James was one of the parade of center fielders who came through Chicago in the years before Rick Monday stabilized the position. James had decent speed and hit .287 one year (1971), but he didn’t have the complete package. His last gasp in the majors was with the 1973 Cubs. By then he was 33 years old. He played another season in the minors before retiring.