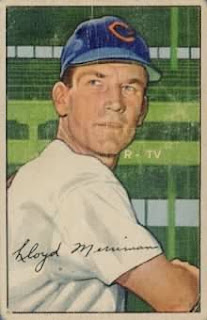 ~Lloyd “Citation” Merriman 1924–2004 (Cubs 1955)
Though Merriman played five seasons in the big leagues, that was the least of his accomplishments. Lloyd Merriman was a genuine war hero in two different wars, World War II and the Korean War. Before he went to war, he was better known as a football star at Stanford. He was nicknamed Citation after the legendary horse because of his blinding speed on the football field. The Chicago Bears drafted him, but he chose service to his country instead. After World War II, he played three seasons of Major League baseball, before returning to the service to fly combat missions in Korea. He played two more seasons in the majors after his return from Korea, the last of which was for the Cubs in 1955. Merriman may not have been one of the best players to put on a Cubs uniform, but he was certainly among the most impressive.

~Brett Jackson 1988– (Cubs 2012)
Jackson was the top prospect in the Cubs system for several years. He seemingly had it all: power, speed, and great defense in center field. Unfortunately, Jackson was always prone to striking out. He struck out a lot in the minors, and he never found a way to overcome it. He got his one shot at the big leagues in 2012, when the Cubs handed him the center field job. In 120 at-bats, he struck out 59 times. That’s the single worst strikeout ratio in baseball history. He hasn’t made it back up to the big leagues since.

~Matt Guerrier 1978– (Cubs 2013)
The Cubs acquired the veteran reliever from the Dodgers in 2013 (for Carlos Marmol), and he pitched quite well for them out of the bullpen. In fifteen appearances, his ERA was only 2.13. But just when he was becoming a key part of the bullpen, Matt hurt his arm, ending his season, and his stint with the Cubs. In his eleven-year big league career he also pitched for the Twins.

~Derek Botelho 1956– (Cubs 1985)
Derek was called up during the 1985 season when all five Cubs starters spent time on the disabled list. He made seven starts at the end of the season and went 1-3, with a 5.12 ERA. He never pitched in the big leagues again. Botelho pitched in the minor league system of Kansas City, Cincinnati, and St. Louis before hanging up his spikes for good after the 1988 season. He has worked as a minor league pitching coach ever since.