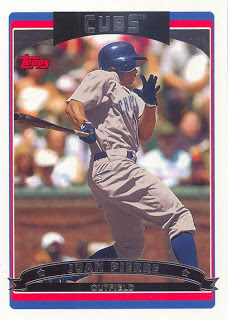 ~Juan Pierre 1977– (Cubs 2006)
He was named after Hall of Famer Juan Marichal, but this Juan also had a great career. Chicago fans knew him well before he played for them thanks to his impressive series against the Cubs in the 2003 NLCS. He hit .300, got ten hits, and scored five runs as the Marlins broke the hearts of Cubs fans everywhere. One of Pierre’s trademarks was his incredible work ethic. He played all 162 games five seasons in a row, including his only season with the Cubs. That year he led the league in at-bats (699) and hits (204), stole 58 bases, and hit .292. On the other hand, because of his weak arm, Pierre had become a liability in the outfield, and he didn’t walk enough for a leadoff man. After the season, he was allowed to leave via free agency. By the time his career ended, Pierre had 631 stolen bases, 2217 hits, and a lifetime batting average of .295. Yet he never played in a single All-Star game. (Photo: Topps 2006 Baseball Card)

~Scott Chiasson 1977– (Cubs 2001-2002)
Chiasson was mainly a minor league pitcher, toiling in the minors for 13 seasons. But he did get a few tastes of the big-time with the Cubs at the end of the 2001 season and beginning of the 2002 season. In ten overall appearances, the right-handed reliever posted an ERA of 11.12. He gave up four homers in only 11 innings pitched.

~Tommy Shields 1964– (Cubs 1993)
Shields was a late season call-up for the Cubs in 1993. The backup infielder got 36 plate appearances to show the brass what he could do. Unfortunately for Tommy, he didn’t show much. He struck out ten times and only got six hits. After his playing career, he went into coaching.

~Billy Myers 1910–1995 (Cubs 1941)
Myers had been the starting shortstop of the Reds for the previous six seasons before he joined the Cubs, and had just driven in the winning run in Game 7 of the 1940 World Series. But Billy couldn’t crack the starting lineup in Chicago. In fact, he spent most of 1941 in the minors, and only appeared in 24 games with the Cubs.

~Art Phelan 1887–1964 (Cubs 1913-1915)
Art was the starting third baseman for the Cubs in their last season at West Side Grounds, but when the season ended, and the rosters of the Cubs and the Federal League Whales were combined, Art was not invited to come along to the new ballpark on Addison and Clark.

~Chris Valaika 1985– (Cubs 2014)
The unheralded infielder had cups of coffee with the Reds and Marlins before the Cubs took a chance on him in 2014. He played quite a bit down the stretch after Anthony Rizzo was injured. Valaika played all four infield positions for the Cubs and hit .231. After spending the entire 2015 season in the minors, Chris hung up his spikes shortly before his 30th birthday.