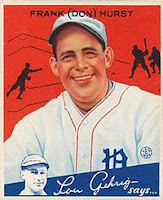 ~Don Hurst 1905–1952 (Cubs 1934)
Hurst was a feared slugger in his day, leading the league in RBI, and slugging more than 100 homers. Unfortunately, his day was before he came to Chicago. Those gaudy stats were accumulated in Philadelphia, in a ballpark that was a bandbox for left-handed hitters. To get Hurst, the Cubs gave up their own young slugging first baseman, Dolph Camilli. Camilli became an All-Star and an MVP. Hurst hit three homers in a Cubs uniform and was out of the game the following year. The trade remains among the most lopsided trades in Cubs history…and that’s saying something. (Photo: 1934 Goudy Baseball Card)

~Matt Clement 1974– (Cubs 2002-2004)
Clement was an excellent starting pitcher during his three years as a Cub. He inspired a fan craze with his soul patch tuft of hair, and people began to wear fake ones on the days he started. In 2003 he was a 14-game winner. Unfortunately for Cubs fans, he wasn’t used in Game 7 of the NLCS against the Marlins. Manager Dusty Baker opted to go with bad relievers like Dave Veres instead of the fully rested and ready-to-go Clement, because he was saving Matt for a World Series game that never happened.

~Ian Happ 1994– (Cubs 2017-present)
Happ was an invaluable member of the Cubs right out of the box. The former first rounder came up to the big league club during the 2017 season and hit 24 homers, drove in 68 runs, stole 8 bases, and played five positions (2B, 3B, RF, CF, LF). He earned the lead-off job out of spring training in 2018 and led off the season with a homer — but it went downhill from there. Happ did manage to hit 15 homers and play well defensively in the outfield, but his strikeouts spiked and his batting average dipped to .233. The Cubs were so concerned about him, they made him start the 2019 season in the minors. He didn’t return to the big league club until the end of July. When he did, he had some good moments (11 homers, .264 average). His versatility remains his biggest asset.

~Dave Pavlas 1962– (Cubs 1990-1991)
Pavlas was a 28-year-old rookie when he joined the Cubs in 1990. The 6’7″ right-hander pitched out of the bullpen in 14 games for the Cubs over two seasons, and did a respectable job. It was a nice reward for his very long (15 years) minor league career. He later also pitched briefly for the Yankees, and even spent a short stint in Japan.

~Ellis Burton 1936–2013 (Cubs 1963-1965)
Burton was an outfielder for the Cubs and had a few decent years filled with clutch hits and homers. The problem with Ellis is that he couldn’t put the bat on the ball consistently enough. His career average was a woeful .216. His teammates called him Bones.

~Charlie Gassaway 1918–1992 (Cubs 1944)
They called him the Sheriff. Charlie pitched for the Cubs during the war season of 1944, and it didn’t go well. In two appearances covering 11.2 innings, he allowed a massive 30 baserunners. He later pitched for the A’s and Indians. 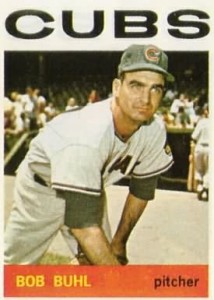 ~Bob Buhl 1928–2001 (Cubs 1962-1966)
Pitchers are not supposed to be great hitters, but Bob Buhl took that concept to a whole different level. His record-setting streak began in 1961, when he was still with the Milwaukee Braves. That year he got a whopping 4 hits in 60 at-bats and struck out 30 times. But he really took it up a notch when he joined the Cubs in 1962. That year he went the entire season without getting a single hit. He was 0-70 and struck out 36 times. He didn’t get another hit until May 8, 1963, when he slapped a single off Pirates pitcher Al McBean, who probably was razzed about it by his teammates the rest of his career. Buhl’s record still stands today: 88 consecutive at-bats without getting a hit. Luckily for Buhl, he was a pretty good pitcher. He pitched in the big leagues for 15 seasons and won 15 or more games five times, including once with the incredibly lousy 1964 Cubs. Buhl even managed to do something completely foreign to his Cubs teammates. He won a World Series ring (with the 1957 Milwaukee Braves). (Photo Topps 1964 Baseball Card)