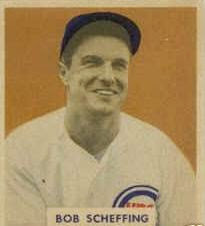 ~Bobo Newsom 1907–1962 (Cubs 1932)
His real name was Louis Norman Newsom but everyone called him Bobo…including himself. Bobo was one of the first players who constantly referred to himself in the third person. “I think I’m going to win this one for Bobo.” He actually got his nickname Bobo because that was what he called most of his teammates. He was rarely around long enough to learn their names — Bobo played for eight different teams. He had a distinguished twenty-season major league career, was a four time All-Star, three-time 20-game winner, a World Series champion, and won more than 200 games in his career, but none of those came for the Cubs. Bobo only pitched in one inning of one game for Chicago during the 1932 season. He didn’t resurface in the majors until 1934 (with the St. Louis Browns), but then pitched in the big leagues until 1953.

~Andrew Lorraine 1972– (Cubs 1999-2000)
Lorraine was a highly regarded prospect who had been traded for Jim Abbott and Danny Tartabull before arriving on the Cubs doorstep as a free agent. By then he had pitched for four big league teams with limited success. His time with the Cubs was about the same. He started 16 games over two seasons, and his ERA was over six. The left-hander later also pitched for Cleveland and Milwaukee.

~Karl Adams 1891–1967 (Cubs 1915)
They called him Rebel because he hailed from the South (Georgia). Adams pitched for the Cubs during their last season at West Side Grounds. He didn’t exactly set the world on fire. His record was 1-9, and his ERA was 4.71. That stint with the Cubs was his last in the big leagues. He pitched in the minors for another ten years.

~Pete Knisely 1887–1948 (Cubs 1913-1915)
Knisely played outfield and second base for the Cubs. In 1915 he got his most extended playing time and drove in 17 runs, by far the best of his career. That was also his last season in the big leagues. He played another eight years in the minors.