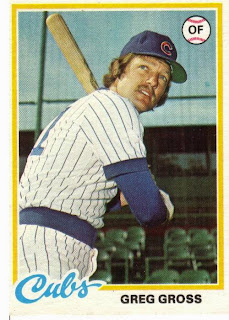 ~Greg Gross 1952– (Cubs 1977-1978)
Greg was a slap-hitting outfielder (zero home runs in about 1500 at-bats) for the Astros (in their rainbow pajama uniform era) when the Cubs acquired him before the 1977 season. The Cubs made a run at the division title before fading at the end of the year, and Gross was a key member of that team as a fourth outfielder. He hit .322 in over 200 at-bats. He even discovered a semi-power stroke, hitting six of his career home runs (he only hit 7 in 17 big league seasons) in a Cubs uniform. After his playing career he went into coaching with the Phillies and Diamondback organizations. (Photo: 1977 Topps Baseball Card)

~Wayne Tyrone 1950–(Cubs 1976)
Tyrone had a nine-year minor league career, but he did get one brief cup of coffee with the Cubs in 1976. Wayne’s power in the minors didn’t really translate to the big leagues. He homered only once in his two-month stint with the team. He arrived in Chicago just a year after his brother Jim left.

~Howard Freigau 1902–1932 (Cubs 1925-1927)
The Cubs acquired Freigau from the Cardinals in the deal that sent catcher Bob O’Farrell to St. Louis. Ty, as his teammates called him, started at third base for the Cubs for two seasons. In his first year in Chicago, he hit over .300. He slumped in his second year, and was replaced at the third base in 1927. He later played for Brooklyn and Boston. Howard died in 1932 when he dove into a shallow swimming pool and broke his neck.

~Harry Croft 1875–1933 (Orphans 1901)
Croft started three games for the Cubs (then known as the Orphans) in September of 1901. He batted twelve times, got four hits (all singles), and drove in four runs. He played a few more seasons in the minors after that, before retiring to his hometown of Chicago. He passed away in 1933 in Oak Park.

~Ed Gastfield 1865–1899 (White Stockings 1885)
Ed was only 19 years old when he played for the Cubs (then known as the White Stockings) on July 11, 1885. The team was on its way to a championship, and Ed was a one-day replacement at catcher. He went 0 for 3. The following season he played in the minors up in Wisconsin, but his baseball career was essentially over the by time he was 21. Ed didn’t live to see the turn of the century. He died in Chicago in 1899 at the age of 34.

~Brandon Kintzler 1984– (Cubs 2018-2019)
The Cubs thought they were getting an important bullpen cog when they acquired Kintzler from the Nationals. Unfortunately, the former Twins closer was a shell of his former self. In 25 appearances he was hit hard and finished with a Cubs ERA of 7.00. He bounced back with a very solid season in 2019. In 62 appearances, he posted an ERA of 2.68, and became what the Cubs thought they were acquiring the year before–one of their most important arms in the bullpen.