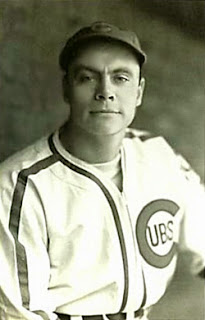 ~Kirby Higbe 1915–1985 (Cubs 1937-1939)
Higbe didn’t get a lot of playing time with the Cubs in parts of three seasons in Chicago, including the 1938 pennant winning year. The Cubs used him primarily out of the bullpen. They traded him in the 1939 season, and Higbe later became a two-time All-Star and 20-game winner with the Brooklyn Dodgers. He didn’t respond well to the arrival of Jackie Robinson in 1947, however, and was shipped off to Pittsburgh. Thanks to the movie 42, he’ll forever be remembered as a villain. It’s probably a pretty accurate portrayal of Higbe, who grew up in South Carolina, and claimed to have developed his throwing arm by throwing rocks at black people.

~Lendy Castillo 1989– (Cubs 2012)
Castillo was a Rule V pick from the Phillies, and he pitched with the Cubs for part of the 2012 season, but was hit hard in limited action. In 13 appearances, his ERA was 7.88. He spent the entire 2013 season pitching in the lower minor leagues for the Cubs (Kane County and Daytona). The Phillies filed a grievance with the league because the Cubs didn’t keep Castillo on their big league roster long enough, and won the grievance. That cost the Cubs a chance to make a Rule V pick in 2014.

~Eric Patterson 1983– (Cubs 2007-2008)
Corey’s little brother was a utility man who got a small taste of the big leagues with the Cubs at the end of 2007 and the beginning of 2008 before being shipped off to Oakland in the trade that brought Rich Harden to the Cubs. He has since played for the A’s, Red Sox, and Padres.

~Henry Lynch 1866–1925 (Colts 1893)
Lynch was a part-time right fielder for the worst 19th century team Chicago ever put on the field. They finished in ninth place that season. Lynch didn’t help much. He hit only .214 in limited playing time–his only stint in the major leagues. After the season, he went back to his native Massachusetts, where he lived the rest of his life.

~John Peters 1850–1924 (White Stockings 1874-1877, 1879)
Peters was a second baseman/shortstop in the days before players even used gloves. He was the starting shortstop on the inaugural National League 1876 championship team and hit .351. In the field, he made quite a few errors (including a league leading 71 in 1879), but have we mentioned this was a time before players even wore gloves? He also played for Milwaukee, Providence, Buffalo and Pittsburgh. 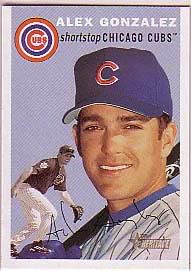 ~Alex Gonzalez 1973– (Cubs 2002-2004)
Gonzalez was the starting shortstop with the Cubs during his years in Chicago and had more than his share of big games. His game winning homers were the stuff of legend. But despite the good moments, he’ll always be remembered for muffing an easy double-play ball immediately after the infamous Steve Bartman moment in the 2003 playoffs. If he had made that play, the Cubs almost certainly would have made it to the 2003 World Series. In fairness to Gonzalez, they might not have even been in that spot if not for his hitting heroics. In that NLCS series he hit three homers and drove in seven runs.
(Photo: Topps 2003 Heritage Baseball Card)