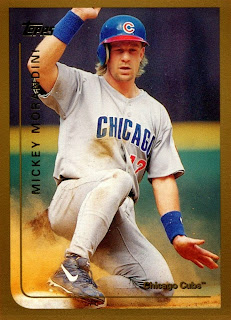 ~Mickey Morandini 1966– (Cubs 1998-1999)
The Cubs acquired the Indiana University graduate for Doug Glanville before the 1998 season, and Morandini stabilized the infield and the lineup for the Cubs team that made the playoffs that season. He reached career highs in homers, RBI, and average in 1998, and led the league’s second basemen in fielding percentage. It was the dandy little glove man’s best season in the big leagues, but he’ll probably be more remembered for his time with the Phillies. He was the starting second baseman for the Phillies team that went to the World Series in 1993. As a Phillie he also pulled the rarest trick in baseball history…an unassisted triple play by a second baseman. It was only the second one in baseball history. (Photo: Topps 1999 Baseball Card)

~Fabian Kowalik 1908–1954 (Cubs 1935-1936)
Kowalik was a converted infielder who became a relief pitcher. He pitched for the Cubs in 1935 and 1936, and even made the postseason roster in 1935. Fabian pitched 4 1/3 innings in game 2 of the 1935 World Series against the Tigers, giving up only one run in relief of Charlie Root. The Cubs lost the game 8-3 (in Detroit). In 1936 he was traded to the Phillies along with Hall of Famer Chuck Klein for outfielder Ethan Allen and pitcher Curt Davis.

~Taylor Douthit 1901–1986 (Cubs 1933)
Taylor was the starting centerfielder for the 1926 St Louis Cardinals championship team, and had a few very good seasons in St. Louis, hitting over .300 and playing an outstanding centerfield. He still holds the record for best range factor for a centerfielder, and he also set the record for most outfield putouts in a season in 1928. But by the time he came to Chicago in 1933, he was strictly an extra outfielder. The Cubs were the last stop on his baseball tour. Taylor ended his career as .291 lifetime hitter.

~Bob Smith 1895–1987 (Cubs 1931-1932)
One of three Bob Smiths to play for the Cubs, this one has the distinction of being the first. He had a very unusual career. After coming up with Boston as a shortstop, Smith was moved to pitcher in his third big league season. Smith then pitched in the big leagues for thirteen seasons, and posted double-digit wins six years in a row. His last time doing it was for the 1931 Cubs. In that tumultuous year (when star player Hack Wilson and his manager Rogers Hornsby were at war all season), Bob won 15 games. The following year he was moved to the bullpen, and pitched for the Cubs in that capacity in the 1932 World Series. The team traded him in 1933 as part of the package used to acquire slugger Babe Herman.

~Terry Francona 1959– (Cubs 1986)
Francona was nicknamed Tito because his father Tito was a big leaguer too. Terry wasn’t quite as good as his dad, but he managed to play ten seasons with the Expos, Cubs, Reds, Indians, and Brewers. He was a first baseman/outfielder who mainly served as a backup, but in his limited at-bats the lefty could hit. He hit .346 and .321 in two seasons with the Expos. With the Cubs he hit only .250 backing up Gary Mathews, Bobby Dernier, and Keith Moreland. Of course, after his playing career was over, Francona became a manager. He will always be remembered in Boston for ending their 86-year curse when he led the team to the 2004 World Series title. He won another in 2007. He was also at the helm of the Cleveland Indians when the Chicago Cubs won their first World Series in 108 years. (Photo: Topps 1986 Baseball Card)