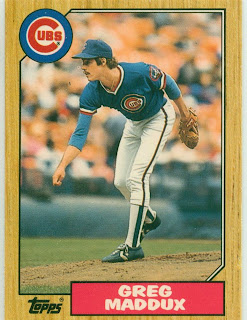 ~Greg Maddux 1966– (Cubs 1986-1994, 2004-2006)
Early in is his Cub career Greg Maddux acquired one of the best baseball nicknames, Mad Dog. Maddux’s nickname is a combination of truth and irony. His looks are deceiving; a slightly-built boyish looking player with a soft and unassuming voice. He hardly looked like a Mad Dog. He was, however a tenacious Mad Dog on the mound who mercilessly used every flaw he could find in an opponent. Maddux was not all warm and cuddly. He was quite simply the best pitcher to ever come out of the Cubs farm system (No-one else is even close), and is in the Hall of Fame for his 350+ wins, 3000+ strikeouts, and 4 Cy Young awards. He won 133 of those games and that first Cy Young with the Cubs (’92). But to Cubs fans, Mad Dog also symbolizes what is wrong with the Cubs. They let him go in free agency for a petty amount of money, and he had his greatest years with the Braves, winning three Cy Youngs and a World Series. In fairness to the Cubs, they realized they made a mistake by letting him go. They tried to atone by bringing him back at the end of his career, and retiring his uniform number when he left the game. His #31 flies from the flagpole in Wrigley Field. They also hired Maddux in the front office as a special assistant to the general manager. Their genuine regret seems to have been taken as an apology by Greg. When it came time to choose which cap he would wear in the Hall of Fame, he opted not to wear the Braves cap even though he probably should have. He said his years in Chicago meant too much to him to snub the Cubs. Oddly enough, Maddux only holds one Cubs career record. He balked more times (22) than any other pitcher in Cubs history.
(Photo: Topps 1987 Baseball Card)

~Kyle Farnsworth 1976– (Cubs 1999-2004)
Farnsworth had a great arm. He routinely threw the ball in the upper 90s, and the Cubs hoped he would develop into a closer. It just never seemed to happen. Part of the reason was that Farnsworth had the reputation of being a bit of a flake (he once was injured kicking an electric fan in the Cubs dugout) and a bit of a headhunter (he started more than one bench clearing brawl, including one where he tackled the opposing pitcher and threw him to the ground). He also was part of the implosion of 2003. In that series his ERA was over 10, and he pitched in five of the seven games in the NLCS. Farnsworth went on to pitch ten more years in the big leagues after he left the Cubs, including stints with the Braves, Tigers, Yankees, Royals, Rays, and Pirates. His best season was 2011 when he saved 25 games for Tampa Bay. He still shares a Cubs record for consecutive strike-outs. He struck out eight men in a row in 2001.

~Marty Keough 1934– (Cubs 1966)
Marty is the patriarch of a baseball family–his little brother Joe and his son Matt both also played big league baseball. Marty had an eleven year career as a big league outfielder, even though he didn’t get many chances to crack the starting lineup. He played for the Red Sox, Senators, Indians, Reds and Braves before finishing his career with the Cubs. He may not have been a star, but he played alongside a who’s who of his era: HOFers Ted Williams (Red Sox), Frank Robinson (Reds), Tony Perez (Reds), Hank Aaron (Braves), Phil Niekro (Braves), Ernie Banks (Cubs), Ron Santo (Cubs), Billy Williams (Cubs), and Fergie Jenkins (Cubs). He remained in the game after his playing career ended, working as a scout for the Padres, Dodgers, and the Cardinals.

~Ben Tincup 1893–1980 (Cubs 1928)
Tincup may be the only Native American player in the early 20th century who wasn’t nicknamed Chief. He was a Cherokee. He was also a World War I veteran. His big league career began before the war (with the Phillies). After he served in the military, he pitched in the minor leagues with Louisville for eight years before he got his one last shot with the Cubs in 1928. Ben pitched out of the bullpen in the last month of the season. That was it for his return to the big time. Tincup may have only won eight Major League games in parts of four seasons spread over fifteen years, but he was a legend in the minor leagues. In 23 seasons he won 233 games.