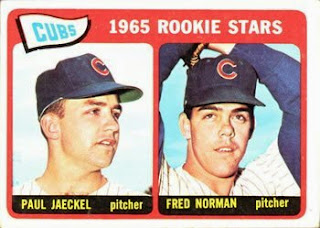 ~Jake Jaeckel 1942– (Cubs 1964)
His real first name was Paul, but his teammates called him Jake. Jaeckel got a cup of coffee as a September call up for the last place 1964 Cubs. He pitched two scoreless innings in his debut, retiring the likes of Sandy Alomar, Matty Alou, Rico Carty, and Joe Torre. In his second appearance, he won the game as the Cubs rallied in the bottom of the 9th at Wrigley to beat the Dodgers 4-3. In his third appearance he picked up the save in another 4-3 win against the Dodgers, striking out Willie Crawford to win the game. His last game with the Cubs was at Candlestick Park in San Francisco. He pitched two more scoreless innings, retiring Orlando Cepeda and Jose Cardenal, among others. Though he was lights out in the big leagues, Jaeckel never got another chance. He spent the next three seasons in the minors before hanging up his spikes at the ripe old age of 26.

~Hal Reilly 1894–1957 (Cubs 1919)
Hal played exactly one game for the Cubs—on June 19, 1919. He played left field and batted seventh, going 0-3 against Brooklyn. Among his teammates that day; the infamous Fred Merkle, one of the greatest nicknames in the biz (Sweetbread Bailey), the pitcher accused of throwing a game (Claude Hendrix), and the goat of the 1918 World Series (Max Flack). The Dodgers team that day featured Hall of Famer Zach Wheat. Reilly may have only played one game in the big leagues, but he had stories for the rest of his life.

~Frank Castillo 1969–2013 (Cubs 1991-1997)
Castillo had a couple of very productive seasons as a starting pitcher for the Cubs. He was never blessed with a blazing fastball, but Castillo utilized a devastating change-up. His best season was 1995, when he won 11 games for the Cubs and posted a sparkling 3.21 ERA. On September 25th of that year, he was only one strike away from throwing a no-hitter against the Cardinals at Wrigley Field. Bernard Gilkey tripled to ruin the day. Castillo was working as a minor league pitching instructor for the Cubs when he drowned while boating with his family in Arizona. He was only 44 years old.

~Daniel Murphy 1985– (Cubs 2018)
The Cubs acquired the three time All Star from the Nationals after Washington fell out of the playoff race. Murphy started out strong but petered out at the end of the season. He never quite rediscovered the magic he had as a Cubs opponent in the 2015 NLCS when he almost single handedly knocked the Cubs out of the playoffs.