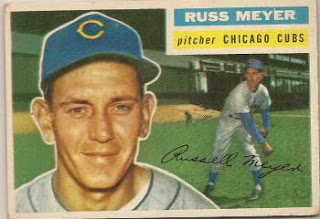 ~Russ Meyer 1923–1997 (Cubs 1946-1948, 1956)
Not to be confused with the B-movie director who was obsessed with large breasts, this Russ Meyer was known as Mad Monk because he had a vicious temper and didn’t take to coaching. One night he ran into an old girlfriend at a bar the players frequented. They began to argue and she got so mad at him that she bit off the tip of his nose. It was still hanging there, but he had to have it stitched back together. The next day he had to sneak into the clubhouse, but he couldn’t hide his face forever. It was all bandaged up and he had two black eyes. The woman claimed she was retaliating for being bitten on the nose herself, and filed suit. It was quietly settled out of court near the end of the 1947 season. Shortly after that, Meyer was traded to Philadelphia (1948). Mad Monk frequently angered his teammates, opponents, and the umpires, often to his own detriment. He would lose his cool on the mound after a base hit or an infielder’s error. Once, with the Phillies, after being knocked out of a game, he took off his spikes and hurled them into the shower ceiling, where they stuck. He won 17 games for the Phillies in 1949, and helped the Braves win the pennant in 1953. He returned to the Cubs only after he was washed up. While he was away from the Cubs he went 24-3 against them. Those 24 wins were almost one third of his 79 overall wins. (Photo: Topps 1956 Baseball Card)

~Alberto Cabrera 1988– (Cubs 2012-2013)
The young Dominican pitched out of the Cubs bullpen for parts of two seasons. He appeared in 32 games and posted an ERA of 5.20. He hasn’t made it back to the big leagues since. His brother Mauricio pitched briefly for the Atlanta Braves.

~Terrell Lowery 1970– (Cubs 1997-1998)
Lowery was a Rule V draft pick out of the Mets system. The center fielder got into 32 games with the Cubs over two seasons. He later played for Tampa Bay and San Francisco. In college Terrell played basketball at Loyola Marymount with Hank Gathers and Bo Kimble. Lowery was the player who fed Gathers for his last basket. Gathers died on the court just a few moments later.

~Mike Harkey 1966– (Cubs 1988-1993)
Mike Harkey was a first round pick of the Cubs who had a very promising 1990 season, winning 12 games. The following year he was goofing around in the outfield before the game doing handsprings and cartwheels. He landed wrong, tore up his knee, and was never the same pitcher. He did manage to win 10 games in his final season with the Cubs, but that was accompanied by a 5.26 ERA. He went into coaching after his playing days, and currently serves on the New York Yankees staff.

~Pete Mikkelsen 1939–2006 (Cubs 1967-1968)
He came to the Cubs off waivers from the Pirates during the 1967 season, and was traded to the Cardinals in the middle of the 1968 season. Mikkelsen didn’t pitch much. He appeared in ten total games for the Cubs, with an ERA north of six. In all, Pete pitched in the big leagues for nine seasons with the Yankees, Pirates, Cardinals, and Dodgers.

~Vic Aldridge 1893–1973 (1917-1924)
On the day President Harding died, the Cubs beat the Boston Braves 5-1 thanks to a great pitching performance by Vic Aldridge, the #2 starter on the team (behind Grover Alexander). Aldridge went on to win 16 games for the Cubs that year. It was in the middle of a very strong three-year run with the Cubs, when he won 47 games. He was traded to the Pirates in 1925 in the trade that brought Charlie Grimm to the Cubs.

~Jack Doyle 1869–1958 (Cubs 1901)
Doyle was born in Ireland, and in 1901, the Cubs acquired the catcher/infielder/outfielder known as Dirty Jack. Why did they call him Dirty Jack? Because he was a gritty rugged baserunner who always got his uniform dirty. He was known as someone who always played the game hard. Doyle only played one season with the Cubs (then known as the Orphans), but his big league career lasted 17 years. In over 6000 career at-bats, Dirty Jack only struck out 281 times. 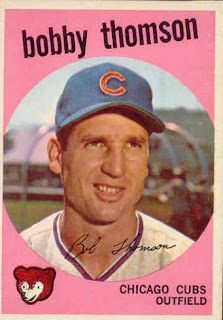 ~Bobby Thomson 1923–2010 (Cubs 1958-1960)
Bobby Thomson got his nickname (“The Flying Scot”) the old fashioned way — -he was actually born in Scotland, and he was known for his diving catches in center field. Most famous for his dramatic home run that won the pennant for the Giants, Thomson was nowhere near that player by the time he arrived in Chicago in 1958. He did have a decent season, but his descent into mediocrity was well underway. By 1959 he was sharing the center field job, and by 1960 the Cubs traded him away. He retired after the 1960 season. In his two seasons with the Cubs Thomson hit a respectable total of 32 home runs, but the team finished in 5th place both years. (Photo: Topps 1959 Baseball Card)