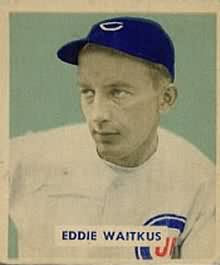 June 14, 1949
Eddie Waitkus became a household name in America, but he certainly didn’t want it to happen the way it did.

While he was with the Cubs, the young first baseman was known for his great defense, his smoking line-drives, and his left-handed bat. The pinnacle of his Cubs career came in 1948, when he made the all-star team. But after the 1948 season the Cubs decided they needed to boost their pitching staff, so they traded the popular Waitkus to the Phillies for two aging starting pitchers (Dutch Leonard and Monk Dubiel). Many people in Chicago were very upset by that trade, but nobody was more upset than young Ruth Ann Steinhagen.

She kept an encyclopedic scrapbook of pictures and clippings of Waitkus. How big of a fan was she? She heard that Eddie was Lithuanian, so she studied and learned the language. Needless to say, 18-year-old Ruth Ann’s world was shattered when Waitkus was traded, and according to her mother, she “cried night and day”.

Eddie had no idea who Ruth Ann was, but he found out on this day in 1949. He was hitting over .300 for Philadelphia, and was leading all NL first basemen in all-star game balloting when the Phillies came to Chicago to play the Cubs at Wrigley Field.

He must have felt vindicated when his Phillies trounced the team that traded him, 9-2. He had a celebratory dinner that night with his teammate Russ Meyer and Meyer’s parents and fiancé. Nothing seemed out of the ordinary when they returned to the Edgewater Beach hotel around 11:00 that night.

There was a note waiting for Eddie there, from a “Ruth Ann Burns,” a girl Eddie had been dating. The note simply said that Ruth Ann was staying in room 1297. Excited to see her, Eddie quickly went to room 1297 and knocked on the door. Instead of Ruth Ann Burns, however, another girl was waiting for him there. She claimed to be Ruth Ann’s friend.

“Ruth Ann will be back in a few minutes,” the girl said, “why don’t you have a seat.”

Thinking it was perfectly conceivable that the statuesque 6-foot brunette was a friend, Eddie took her up on the offer. He was sitting in a chair in room 1297 when Ruth Ann Steinhagen emerged from the closet holding a 22 caliber rifle, and said…

Then she shot him in the chest.

As Eddie slumped to the ground in agony, Ruth Ann Steinhagen calmly picked up the phone and told the front desk that she had just shot Eddie Waitkus. That phone call probably saved his life. The bullet narrowly missed his heart, and miraculously missed all of his other major organs, but he surely would have bled to death. As it was, it took several hours in the operating room to successfully remove the bullet.

When it came time to punish Ruth Ann Steinhagen, Eddie refused to push for a harsh sentence. He did not attend the trial, and never saw her again. When asked about her, he simply replied: “She had the coldest looking face I’ve ever seen.”

At her trial she couldn’t explain why she had done what she had done. She simply explained that “I’m sorry that Eddie had to suffer so, (but) I had to relieve the tension that I have been under the past two weeks.” Ruth Ann was found legally insane, and was sent to a mental institution. After a few years of electric shock therapy, she was declared “sane” and released in 1952.

Eddie Waitkus missed the rest of the 1949 season, but eventually returned to the Phillies the next year, and played six more seasons in the big leagues. His baseball abilities didn’t seem altered by the event, but as you might imagine, Eddie changed. The once affable and friendly Waitkus became withdrawn. After his career, he became an alcoholic and a recluse. He died in 1972 at the very young age of 53.

His story is said to be the inspiration for Bernard Malamud’s novel about a crazy female fan “with cold eyes” who shoots a baseball star. That novel is called “The Natural.”

June 11: In 1952, Hank Sauer has a day to remember. He hits three solo home runs against Phillies pitcher Curt Simmons, and the Cubs win the game 3-2…(listen to the audio below) In 1967, Adolfo Phillips does him one better. He hits four homers in a double header against the Mets; one in the first game, and three in the second. The Cubs win both games.

June 12: In 1923, Hack Miller has his best day as a Cub when he hits two homers and knocks in seven runs against the Braves in 12-11 Cubs victory…In 1979, the Chicago Sting play a friendly match against a team from the German Bundesliga, FC Kaiserslautern. They beat them 2-1 in front of only 5000 fans.

June 13: In 1942 Cubs pitcher Bill Fleming has his best day as a pro. The big right-hander gives up only one hit to the Boston Braves, and the Cubs scratch out a run in the bottom of the 8th to win the game 1-0…In 1980, Dave Kingman doesn’t show up for a game at Wrigley Field.

June 14: In 1981 the Chicago Sting face off against the Washington Diplomats. The Diplomats come out on top—2-1…In 1986, Gene Michael is thrown out of his first game as Cubs manager….In 2007, Ichiro Suzuki makes his first appearance at Wrigley Field and the Cubs come back in the bottom of the eighth to win the game. Cesar Izturis gets the game winning double.

June 15: In 1971, Bill Hands throws a three-hitter against the Atlanta Braves. Joe Pepitone knocks in the winning runs for the Cubs.

June 16: In 1972, Billy Williams hits a homer in his fourth game in a row, and the Cubs shut out the Dodgers 4-0. Burt Hooton tosses a six hitter. Billy will narrowly miss winning the triple crown in 1972, and will finish a close second to Johnny Bench in the MVP voting.

June 17: In 1971 Don Kessinger shows the Cardinals how it’s done as he goes 6 for 6 against Steve Carlton and the Cardinals bullpen (including ex-Cub Moe Drawbosky). Kessinger also scores the winning run in the bottom of the tenth on a Ron Santo single to left. Cardinal leftfielder Lou Brock’s throw to the plate is too late. 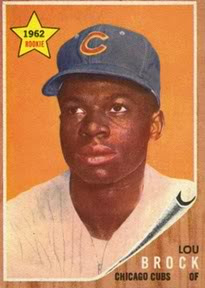 June 15, 1964
The Cubs made the worst trade in the team’s history. They traded Lou Brock on an off-day before a home series with the Philadelphia Phillies.

At the time, it wasn’t considered a horrible trade. In fact, St. Louis fans thought they were getting ripped off. Why? The guy the Cubs received for Brock, Ernie Broglio, had won 18 games in 1963. And Lou wasn’t exactly the fully developed he player he later became.

Coming up during the ill-fated College of Coaches experiment, in an organization that provided very little guidance at all for their players, Lou Brock was hopelessly lost at the plate, and was a liability in the outfield. He had been yanked this way and that, and wasn’t given the opportunity to find himself.

Lou Brock hit .263 in ’62, .258 in ’63, and was only hitting .251 in 1964 when the trade was completed. Still, Cubs players knew immediately that they had been ripped off. Every player on the bench to a man couldn’t believe that the Cubs had traded Brock. He had obvious star qualities, had hit long home runs, had shown incredible speed and skill on the bases, and was only 24 years old. All he really needed was guidance and coaching.

He got that in St. Louis. The Cardinal coaches told him he wasn’t a power hitter–and he should stop trying to hit home runs. They also told him he had the green light to steal bases, and highly encouraged him to run. This shocked Lou. The Cubs had discouraged that part of his game.

As a Cardinal, Lou Brock would lead the league in stolen bases 8 of the next 10 years, and would retire as the record holder for most stolen bases in a career. He wouldn’t hit that many home runs, but with his new found stroke that concentrated on utilizing his speed, he became a .300 hitter, and a clutch hitter at that. In his three World Series with the Cardinals, he would hit .391, winning the Babe Ruth Award as the MVP of the 1967 World Series.

In his first year of eligibility, he was inducted into baseball’s Hall of Fame.

As a footnote, the guys the Cubs received in return didn’t do a thing. Ernie Broglio went 7-19, Bobby Shantz won zero games, and Doug Clemens played a grand total of 182 games as a backup outfielder.

Any way you slice it, this trade lives up to its status as the worst trade in Cubs history.