*William Joyce (“Lord Haw-Haw”) is captured. He is later charged with high treason in London for his English-language wartime broadcasts on German radio, convicted, and then hanged in January 1946

*German communists, led by Walther Ulbricht, arrive in Berlin. They will found East Germany in the coming years.

*The Iranian government demands that all Soviet and British troops leave the country. 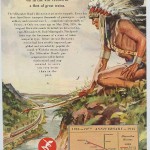 *This week also marks the 10th anniversary of the very popular Milwaukee Road train Hiawatha route. It goes from Chicago to Minneapolis (through Milwaukee and Wisconsin Dells) and also Chicago to Sioux Falls (through Rockford & Dubuque). The train is still the number one mode of transportation in America.

*Riverview Park opens for a 42nd Season of Fun! The amusement park is one of Chicago’s biggest attractions, and is located near Wrigley Field on the north side of town. It will remain open until 1967.

*More than 17,000 fans show up at Tam o’ Shanter Country club in Niles to see Bing Crosby and Chick Evans tee off. This sets the record for the biggest one day crowd to ever see a golf match.

*PRICE CHECK: Plastic raincoats cost $4.95, Pork and Beans are only 25 cents for 2 cans

*The Cubs return to Wrigley field, and immediately start winning again. They draw a huge crowd to their double header against the Dodgers. Paid attendance is 37,133 despite the less than ideal weather conditions (it’s a little rainy). Another 1100 serviceman are admitted for free. The Cubs win game one 6-1, but the second game is called because of darkness around 8:10 with the score tied 2-2. Dodgers manager Leo Durocher throws a hissy fit in game one, and was thrown out of the game.

*Though the Cubs are starting to win, they are still far behind the Giants who have started the season at 21-6; their best start since 1907. The Pirates are in second place, 5 1/2 back. The Dodgers are also ahead of the Cubs in the standings–they had won eleven straight before coming to Chicago. At the end of the week, the Cubs are two games over .500, in fourth place, still 6 1/2 games behind the Giants.

*Henry Kissinger celebrates his 22nd birthday this week. He is serving in the US Army in the 84th armored division (which fought in the Battle of the Bulge). His job now is tracking down Gestapo officers and saboteurs.

*Ian Fleming turns 37. He is serving as a high ranking naval officer in British Intelligence.

*One of the most famous and popular performers in America, Bob Hope, celebrates his 42nd birthday. He’s doing one of the things that endears him to his countrymen; entertaining the troops.

*Two babies are born this week that grow up to be famous. Future musician John Fogerty is born in Berkley California, and Priscilla Ann Wagner is born in Brooklyn. She will later marry Elvis Presley. 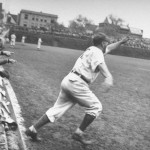 CHARLIE GRIMM was the manager of the 1945 Cubs. They called him “Jolly Cholly” because he was a fun-loving guy who always seemed to be happy. He played the banjo to loosen up the team on long train rides, and was a constant chatterbox on the field. His laid back and tolerant approach seemed to coax great performances from mediocre players, and legendary performances from great players, but he could be firey with umpires when things didn’t go his way. Charlie remains the last Cubs manager to win a pennant. He was such an important part of Cubs lore (he played for the Cubs for many years too), that his wife was allowed to spread his ashes in Wrigley when he died in 1983.