*Heinrich Himmler, German head of the SS, commits suicide in British custody. He was only 45 years old.

*President of Germany Karl Dönitz and Chancellor of Germany Count Lutz Schwerin von Krosigk are arrested by British forces at Flensburg. They are respectively the last German Head of state and Head of government until 1949. 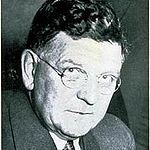 *From the Tribune on May 22nd: BILL GIVING U. S. AID TO AIRPORTS ENTHUSES KELLY: Mayor Kelly (photo) discusses Chicago’s post-war airport with fresh enthusiasm as he makes arrangements to attend hearings in Washington D. C.

*Lauren Bacall and Humphrey Bogart get married, and dine in public for the first time as husband and wife at the Pump Room in Chicago.

*Buckingham Fountain’s lights are hit by a temporary dim-out

*The Tigers and A’s have an unbelievable 7 straight games postponed due to rain.

*The Cubs long, long road trip is finally ending, and it has been a disaster. The Cubs have lost 12 of their last 15.

*One of those losses is a 15-12 loss to the Dodgers on Pee Wee Reese’s 27th birthday. Unfortunately for the Dodgers, he’s not there to celebrate it with them. He’s one of the many Dodger stars that has been drafted into the military.

*The Cubs also got a bit of good news. Pitcher Ed Hanyzewski flunked his induction physical for the second time, and was preparing to return to the team.

*“Thrill of a Romance” starring Esther Williams (in a bathing suit) and Van Johnson debuts. It’s a top ten box office attraction of the year 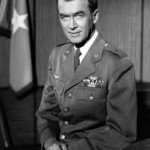 *Jimmy Stewart celebrates his 37th birthday while serving in the military. He joined USAAC in 1940. Jimmy was initially refused entry because he was 5 pounds under the required 148 pounds, but he talked the recruitment officer into ignoring the test. He was one of Hollywood’s most decorated war heroes, but he rarely if ever talked about it. Stewart eventually became a Colonel, was awarded the Air Medal, the Distinguished Flying Cross, the Croix de Guerre, and 7 battle stars.

*Frank Capra’s 48th birthday is also celebrated while serving in the military. He is a Colonel too, making propaganda films for America.

*Raymond Burr turns 28 this week, but it isn’t a happy birthday. The Navy man has been injured in the battle of Okinawa. (The military hasn’t asked, so he hasn’t told)

*Pete Townshend is born in London. His father is a saxophonist and his mother is a singer. Will Pete also go into music? 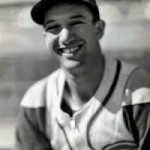 Cy Block is a backup infielder for the Cubs serving the last few months of his military commitment. He played briefly for the Cubs during the 1942 season, but Uncle Sam stole him before the 1943 season began. Block will return to the roster before the end of the season, in September, just a few weeks before the World Series. He won’t get a chance to bat in the Series, but he will come in as a defensive replacement. The Cubs send him to the minors for the 1946 season when all of their war-time players return, but in September of 1946, Cy gets one more shot at the bigs. He plays his final four major league games that month. Block died in September 2004 in the midst of that seasons notorious Cubs collapse.