*The New York Times describes the damage in Germany this way: “Berlin is dead. As a city, it no longer exists. The proud capital of Germany … has been wiped from the map of Europe—wholly and irrevocably.”

*The last battle of World War II in Europe is fought at Poljana near Slovenj Gradec, Slovenia. It is called the Battle of Poljana.

*The last German POWs are brought to the United States…

*The city celebrates Mother’s Day. These are the headlines from the Chicago Tribune…

*Studs Terkel turns 33 this week. He is working in Chicago radio, voicing soap opera productions and announcing news and sports. 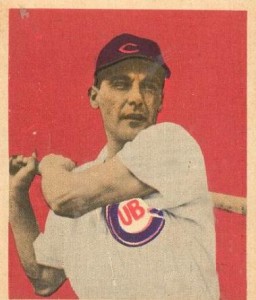 *The Cubs are still on their longest road trip of the year. They come back from a 10-3 deficit in the 4th inning to win a dramatic game in Boston 13-12. They score six in the 7th to tie it, the last four on a grand slam by Phil Cavarretta (photo). Bill Nicholson wins the game with a home run in the top of the ninth.

*They run into a bit of a buzzsaw in New York, however, as the Giants sweep the series at the Polo Grounds.

*Yogi Berra (photo) celebrates his 20th birthday in the military, serving as a gunner’s mate in the US Navy. Unlike most of baseball comrades, Yogi was actually in harm’s way. He participated in D-Day.

*Richard Daley, the future Mayor of Chicago turns 43. He is serving as a state senator in Springfield, and preparing to run for Sheriff…the only political race he will ever lose.

*Henry Fonda celebrates his 35th birthday serving as a Lt. Junior Grade in Air Combat intelligence in the Central Pacific.

*Little Georgey Carlin is causing trouble already, despite the fact that’s he only eight years old this week. He lives on West 121st street in Manhattan. His dad is a newspaper ad man. 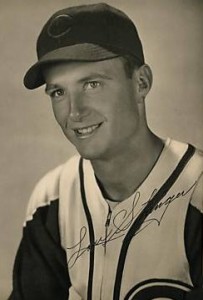 LOU STRINGER is not along for the 1945 pennant ride because he’s serving in the military. He became the starting second baseman after the Cubs made the ill-advised Billy Herman trade in 1941, and started there in 1942 too, before being drafted. He was known more for his glove (a decent double play man) than his bat, although he did have two pretty good offensive seasons with the Cubs. When he came back from the war he had another cup of coffee with the Cubs before they traded him to the Boston Red Sox. He finished his career in Boston in 1950. Lou passed away in 2008, just a few weeks after the Cubs disastrous post season collapse.