*The Franck Committee recommends against a surprise nuclear bombing of Japan. The committee was led by Manhattan Project scientist, Nobel Prize winning physicist James Franck (photo). His conclusion states: “We believe an early, unannounced attack against Japan inadvisable. If the United States would be the first to release this new means of indiscriminate destruction upon mankind, she would sacrifice public support throughout the world, precipitate the race of armaments, and prejudice the possibility of reaching an international agreement on the future control of such weapons.” It is delivered to the president on June 11th.

*Gwendolyn Brooks releases her first book of poetry. A Street in Bronzeville, published by Harper and Row, brings her instant critical acclaim. She receives her first Guggenheim Fellowship and is one of the “Ten Young Women of the Year” according to Mademoiselle magazine. 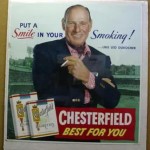 *Brooklyn manager Leo Durocher, the dapper man about town (photo) and most hated man in baseball, is arrested on a complaint by a fan that Durocher slugged him.

*The Cubs have a very good week. They win 5 out of 6 against the Cardinals and the Reds. At the end of the week they are 23-19, in fourth place, 3 games behind the first place New York Giants.

*Frank Lloyd Wright turns 78. He is working on The Solomon R. Guggenheim Museum in New York City. It occupies Wright for 16 years (1943–1959) and is probably his most recognized masterpiece.

*Dean Martin turns 28. He is serving in the Army, stationed in Akron, Ohio. 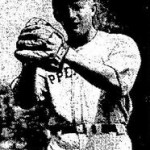 DALE ALDERSON was one of the bright young pitching prospects in the Cubs minor league system. He got a cup of coffee with the team in 1943, and again in 1944, and would have had a real chance to contribute in 1945, but Uncle Sam had other ideas for Dale. He served in the military for the entire 1945 season at the Naval Training Center in San Diego, where he remained until discharged on October 19, 1945, just nine days after the Cubs lost game 7 of the World Series to the Detroit Tigers. Alderson never made it back to the big leagues again.