*Japan offers to surrender to the Allies, “provided this does not prejudice the sovereignty of the Emperor.”
*The Allies reply to the Japanese surrender offer by saying that Emperor Hirohito will be subject to the authority of the Supreme Commander of the Allied Forces.

*The Chicago Tribune August 11: “CHICAGO CALM – PLANS LAID FOR A QUIET V-J DAY: Chicago, inured to peace rumors, went calmly about its everyday tasks yesterday after learning of the Japanese peace offer. The excitement which swept London and other cities upon receipt of the report was not in evidence here.”

*The Chicago Tribune, August 14: ” JOYOUS BEDLAM LOOSED IN CITY: Within minutes of the announcement, 10,000 persons jammed downtown sidewalks and streets. By 10 p.m. half a million had visited —or tried to visit— the area. They were noisy. They represented all ages and all classes. Elderly men and women were as numerous as bobby soxers. Thousands of sailors, soldiers, and marines were there. Young women kissed them until their faces were smeared with lipstick. At State and Madison sts., 20 sailors formed a line, grabbed pretty girls as they passed, kissed them, and passed them from one to another. (Some of this can be seen in the V-J day newsreel video above. The photo is State Street on VJ Day)

*When the news breaks that the Allies have achieved victory in Japan, the Cubs are in Philadelphia–the same place they celebrated V-E Day a few months earlier. Though they lose that last game against the Phillies, they begin the post-war era 31 games over .500, 5 1/2 games ahead of the second place St. Louis Cardinals.

*“Have I told you lately that I love you” is a big country hit song. The original is by Lulu Belle & Scotty. Many others have also recorded it. 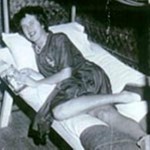 *Julia Child (photo) turns 33 years old. She is working as an OSS spy in Sri Lanka.

*Two babies born this week, Steve Martin and Gene Upshaw, will go on to become famous in adulthood.

Cub of the week: BOB SCHEFFING

Scheffing is one of the many catchers on the Cubs, but he is spending the 1945 season in the military. He won’t get out of the service until the 1946 season. Scheffing will remain with the Cubs until the 1950 season, and will even start most of the games during the 1947 and 1948 seasons, but will never see postseason play. After he retires, he’ll become a coach. From 1957-1959 he’ll even manage the Cubs…to three sub .500 seasons.