The Chicago Cubs were all set to play a game against the Pittsburgh Pirates at West Side Grounds. Cubs outfielder Jimmy Sheckard, a known prankster, began teasing Cubs backup infielder Heinie Zimmerman about his terrible fielding. The players had to be separated on the field. After they went into the clubhouse, Sheckard made one more crack, and the hot-headed Zimmerman completely lost it. He grabbed the nearest thing to him and threw it at Sheckard as hard as he could. Unfortunately, it was a bottle of ammonia–which hit Sheckard in the forehead and exploded. Sheckard screamed in agony as the ammonia began to leak into his eyes. He was rushed to Cook County Hospital, which luckily for him, was located across the street from the ballpark. Meanwhile, manager Frank Chance jumped Zimmerman and the two men got into a bare-knuckled fist fight. Chance was more than fifteen years older than Zimmerman, however, and Heinie was getting the best of him.

Seeing their manager losing the fight, several teammates jumped in to help him and together they beat Zimmerman so badly that he had to be taken to the same hospital as Sheckard. Both Zimmerman and Sheckard were out for a month. Sheckard was lucky that he didn’t lose his eyesight, but he was never the same player. The rest of ’08 he hit well below his average, and he continued to decline after that. Zimmerman was a key backup for the ’08 championship team. A few seasons later he became one of the best hitters in baseball. Unfortunatly, his story doesn’t end gracefully. He was banned for life for trying to convince his teammates to throw a game during the 1919 season. Soon after he was kicked out of baseball he started working for famed New York gangster Dutch Schultz. He died in March of 1969.

In other Chicago Cubs news this week… 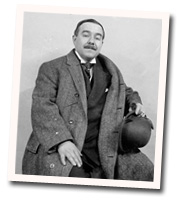 *The Cubs lose three out of four to the Pirates, and they don’t just lose, they get killed. The Pirates scored 33 runs in their three wins. Cubs owner Charles Murphy (Photo) gets so upset, he threatens to burn or bury the Cubs 1907 Pennant Flag. He says: “We’ve had nothin’ but accidents and injuries and tough luck weather since we raised it, and it began on the day we raised it.” The Cubs are still in first place, however, with a record of 23-15.

*The Cubs purchase the contract of 33 year old Doc Marshall from the Cardinals. He will get 20 at bats before he takes a permanent residence way at the end of the Cubs bench.

*Three babies are born this week that will make their mark on the world.
James Bond author Ian Fleming (May 28),
cartoon voice actor Mel Blanc (May 30), and
Cocoon actor Don Ameche (May 31).

*In Iowa a little boy named Marion Morrison (photo) turns 1. He will be known to the rest of us as John Wayne (May 26).

*A 10-year-old boy (May 31) working in his parent’s Ohio grocery store will one day teach the world about power of positive thinking. His name is Norman Vincent Peale.

*The best athlete in the world that nobody knows about yet, Jim Thorpe, turns 20 this week (May 28). He is a football star in college at Carlisle Indian Industrial School. In the upcoming season in a game against Army, a young cadet named Dwight D. Eisenhower will injure his knee while trying to tackle Thorpe.

*In Cleveland Ohio, Leslie (Bob) Hope and his family immigrate to the United States from England just in time for his 4th birthday (May 29).

Price Check: A baseball “fielder’s glove” that fits in your back pocket and is the size of your palm, goes for $1.55 at Sears, Roebuck and Company.

If you travel back in time, and you feel a little weird sharing a drink with someone from a tin cup, that’s too bad. Disposable paper cups won’t be invented until the next year—financed by a hypochondriac banker in New York.