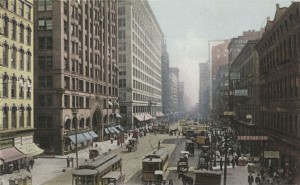 Chicago’s Board of Aldermen announce that the addresses in Chicago will all be changed beginning September 1st, 1909. Madison and State streets are declared the center of the grid system, and all addresses will be based on their proximity to those streets. (Photo: Madison & State Street in 1908) The city is divided into one-mile sections which contain 8 blocks to the mile. Every average block is assigned a new series of 100 numbers. Therefore, each 800 in numbers is one mile.

The streets are numbered going south, and named going north, and an alphabetical system is used. That’s why all of the streets with the same letters are lumped together. Every four blocks (or half mile) is a major secondary street (like Addison is 3600, Irving Park Rd. is 4000, etc.) Thanks to this system, Chicago is still one of the most easily navigable major cities in the world. 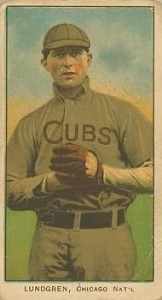 *The Cubs win three out of four in Brooklyn against the Dodgers at Washington Park. The highlight of the series is the pitchers duel between Cubs starter Carl Lundgren and the ace of the Dodgers staff: Kaiser Wilhelm.

*The Cubs go to Philadelphia next, and Three Finger Brown pitches a 1-0 shutout. Jimmy Slagle gets the only RBI.

The Lusitania sets the Atlantic crossing record (a little more than four days) on June 12. Less than ten years later it’s sinking by a German torpedo (May 17, 1915) turns American opinion against Germany. (There were many American passengers aboard.) The sinking of the Lusitania is still considered to be the second worst passenger ship disaster in history (after the Titanic.)

*Wimbledon is still reeling from the scandal of last year. Norman Brookes became the first man from (gasp) overseas to win the 30-year old tournament. He was from Australia. This year all is right with the world again. Britain’s Arthur Gore wins Wimbledon. Only one other Englishman will ever win it again. (Fred Perry 1934-1936)

*Cole Porter turns 17 (Jun 9) in Worcester, Massachusetts. He has just been crowned Valedictorian of his school and plans to attend Yale in the fall. A musical prodigy since a very early age, he wrote his first operetta at the age of 10. Before he retires from music he will have written more than a thousand songs, including “I get a kick out of you,” “I’ve got you under my skin,” and “You’re the Top.”

Price Check: Men’s baseball spikes, “made from a good selection of calf stock,” are $1.69 a pair.

If you travel back in time, don’t look for Reader’s Digest at the newsstand. The first issue won’t come out until 1922.