Many historians consider Big Jim Colosimo the father of the Chicago mafia. His official title in 1908 is precinct captain (for First Ward Aldermen Kenna & Coughlin), but his real job is providing muscle, and collecting bribes. In exchange for these services, he is allowed to own and operate more than 200 brothels in the Levee District. After being unchallenged for the past decade, however, his men are starting to turn up dead thanks to the brutal gang known as “The Black Hand.” To reclaim authority, Big Jim recruits even more muscle from New York–namely a hood named Johnny Torrio. (Torrio will bring in his buddy Al Capone in 1919.) With Torrio’s help, in the coming years Big Jim will lay the groundwork for the organization that eventually becomes known as the Chicago Outfit. He runs it with an iron hand until his lieutenants decide they don’t need him anymore. Big Jim is murdered just as Prohibition begins in 1920. 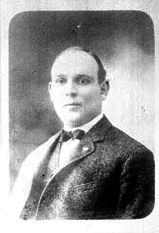 Ike Bloom is the other “precinct captain” who helps the aldermen make their collections. In exchange for this, he is given the monopoly for bulk whiskey sales in the ward. Bloom is Colosimo’s business partner in the brothels and is widely considered to be the brains of the outfit. He expands his business to include most of the popular nightclubs in Chicago–including the club that gives comedian Joe E. Lewis his start. When Big Jim is murdered, it’s Ike Bloom who delivers the eulogy. By then he is officially known as the head of the First Ward Democratic organization; an organization he will run until his death in 1930. That job will remain in mob hands until the 1980s.

*The Cubs have their worst week of the season, losing five games in a row (3 against the Phillies, two against the Giants). A record setting crowd comes to the Polo Grounds in New York for the fierce Cubs/Giants rivalry. Orval Overall does his part, pitching a 2-hitter, but he still loses 3-2 to Christy Mathewson. 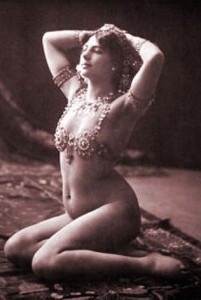 *In Paris, Mata Hari (photo) is 32 (Aug 7), and drawing crowds as an exotic dancer. She will be executed as a double agent during World War 1.

*Louis Armstrong turns 7 (Aug 4). He lives in a very rough section of New Orleans with his grandmother; a woman who was born into slavery.

*Elizabeth Bowes turns 8. She will grow up to marry the second son of King George V of England, who will himself become King George VI. Elizabeth will be known as the Queen Mother for most of her life. Her daughter will become Queen Elizabeth after George VI dies in 1952.

Price Check: A violin case covered in black morocco leather can be yours for only $3.65. When your child (for instance, little Al Capone is 9) grows up, he can use it to carry his Tommy Gun.

If you travel back in time, don’t compliment a woman by calling her a “bona fide Betty Crocker,” because that fake character won’t be invented until 1921.