Opening day is a huge day in Chicago for the defending champs. The Cubs have their home opener at the newly refurbished West Side Grounds (April 22). Owner Charles Murphy has turned the ballpark into a shrine for his players. There are two big sculptures outside the park, one of Frank Chance, and another of a faceless pitcher. The stands have ornamental piping with cast-iron baseballs and bears, and red, white & blue Cubs flags are flying everywhere. (Photo: Cubs batting practice at West Side Grounds, from the Daily News Collection at the Chicago Historical Society.)

West Side Grounds is located in the middle of what is now the UIC campus. It’s a wooden structure, seating about 16,000, and it’s within smelling distance of the Stockyards. A psychiatric facility is located just beyond the left field wall. Patients yell and scream things during the game so often that it has already inspired the phrase “That came out of left field.”

Cubs fans are renowned for their sportsmanship, and are known to cheer for good plays from both teams. Although they attract pretty big crowds, they aren’t known as being die-hards. That might be because the fans are pretty far away from the action—the foul territory is pretty big, and the outfield is so big that pitchers warm up in the outfield without getting in the way.

On this opening day in 1908, one young fan charms manager Frank Chance to let him see the game. When Chance arrives, the youngster says “Boy I sure wish I could see the game today.” Chance waves for the boy to come on in with him. (That boy will grow up to found the National Football League–George Halas).

Young George and the rest of the overflowing crowd on hand to see the game witness a slightly different version of baseball than we know in this century. For instance, the pitching rules are still fairly lax. It’s still legal to apply slime, soap, tobacco juice, or any other spit to a ball. It’s also legal to scrape, puncture, and even sand a baseball. Spitballs are not outlawed until 1920.

* The World’s Fair begins in London. It runs until October 31st.

* A man claims to have reached the North Pole. He will soon be exposed as a fraud and a liar.

* A married couple becomes the first to travel across the county in an automobile (April 24).

* In Minneapolis, a young boy named Eddie Heimberger turns two (April 21). Eddie’s parents are German immigrants. Eddie will eventually go to business school, leave business after the stock market crash of 1929, and go into show business. Using the stage name Eddie Albert, he will go on to star in the television series Green Acres. 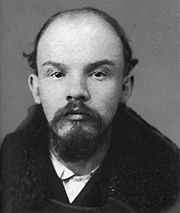 * Vladimir Lenin (photo) turns 38 in Finland (April 21). He is in exile because of the pamphlets he has written about workers rights. Russia is still nine years away from the Bolshevik Revolution.

* A little boy is born near Greensboro, North Carolina (April 25). He is the third son for his Quaker parents, and will grow up to be one of the most famous newsmen in history–a pioneer in television news, Edward R. Murrow.

At the Movies: “The Dog Outwits The Kidnapper”

Price Check: 26 year old Dr. William Scholl’s first invention, the Foot Eazer, has been available in his home town of Chicago for two years. It costs 9 cents. Next year he will found a correspondence school for shoe-fitters, and within three years his foot product business will be international.

If you travel back in time, and want to buy sneakers, forget it. They don’t exist until 1917.