On this Thanksgiving, we honor the Native Americans who played for the Cubs…

~Ben Tincup 1893 (Cubs 1928)
Tincup may be the only Native American player in the early 20th century who wasn’t nicknamed Chief. He was a Cherokee. He was also a World War I veteran. His big league career began before the war (with the Phillies). After he served in the military, he pitched in the minor leagues with Louisville for eight years before he got his one last shot with the Cubs in 1928. Ben pitched out of the bullpen in the last month of the season. That was it for his return to the big time. Tincup may have only won eight Major League games in parts of four seasons spread over fifteen years, but he was a legend in the minor leagues. In 23 seasons he won 233 games.

~Virgil Cheeves 1901 (Cubs 1920-1923)
Cheeves was part-Cherokee, and in the politically incorrect 1920s, his teammates nicknamed him “Chief”. To be fair, nearly every Native-American to ever play the game was given the same nickname. Virgil’s best season was 1922 when we won 12 games and posted an ERA of 4.09. 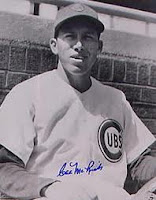