My Brush With Ernie Banks

Ernie passed away yesterday at the age of 83. I feel like I lost a member of my family. Sad, sad, sad, sad. He was my childhood hero. There will never be another Ernie Banks. I think everyone in Chicago has their own personal Ernie story. Here’s mine…

Michael Jordan and Ernie Banks are probably the two most famous and popular athletes to ever play in Chicago. Through a very odd twist of fate, I met both of them on the same day. 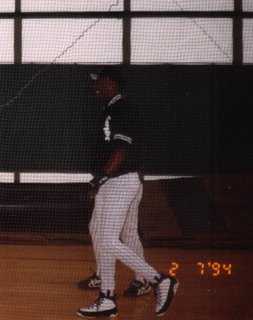 In the early days of the John Landecker show on WJMK, I was often sent out in the field to cover big events and/or interview celebrities. Nobody was bigger in Chicago than Michael Jordan. When he retired from basketball the city was in collective shock.

When he announced that he had signed with the White Sox and was going to play baseball, we were even more shocked.

On February 7, 1994, I went to the press conference announcing Michael’s baseball contract. There was a media throng there unlike any I’d encountered before. So many credentialed members of the press were there, they had to set up bleachers for us.

This was the only time in my career that I had a chance to speak with Michael Jordan. I wish I could report to you what I asked or what he answered, but to be completely honest with you, I don’t remember. That wasn’t the most memorable moment of the day for me.

It also wasn’t watching Michael hit the ball in a batting cage, although I did take pictures of that for posterity. (That’s him in the White Sox uniform above.) 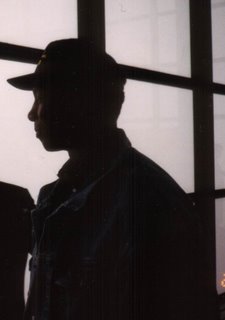 For me, the memorable moment occurred while the press was cataloguing every moment of Michael’s batting practice. I got bored after about five pitches, and looked around the room. I thought I was seeing things when I saw a familiar face about ten feet away from me. Since I already had the camera in my hand, I snapped a photo. (Yes, I know. I’ll never be a professional photographer)

I must have been mistaken.

Was that my childhood hero Ernie Banks standing there? What would he be doing at a White Sox press conference?

I walked over and introduced myself. It really was him. He was wearing his “Mr. Cub—Ernie Banks” hat, and was watching the press reaction to Michael.

“What are you doing here?” I asked after I shook his hand.

“Do they usually ask you to stop by?” I asked.

When other members of the press heard Ernie’s voice and saw that I was interviewing him, they all started to mosey over for a quote. I knew I wouldn’t have much more time to talk to him, and I had a million questions to ask him, but I was in professional mode—trying to get something for us to use on the air the next morning.

“I think he’s going to be one of the all-time greats,” Ernie said.

On the other hand, I did discover why the White Sox asked him to come to the press conference. He was the only “expert” there who thought Michael was going to be a great baseball player.

Even the White Sox need that kind of optimism once in a while.