Historical Events (September 4–September 10): Where were the Cubs? 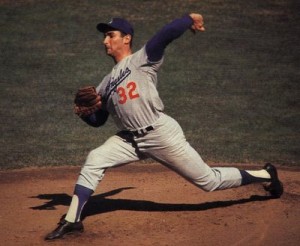 September 9th, 1965.
The place was Dodgers Stadium in Los Angeles. 29,130 fans in the stands witnessed one of the best pitched games in Major League History. On the mound for the Dodgers was Sandy Koufax, on his way to his second Cy Young (he would a third in 1966). For the Cubs, Bob Hendley, a journeyman pitcher recently acquired from the Giants. The score was 0-0 in the bottom of the fifth and neither pitcher had allowed a single base runner. That ended when Hendley walked Dodgers outfielder Lou Johnson to lead off the inning. The next batter, Ron Fairly, bunted the ball a little too hard–right to the pitcher. Hendley was prepared to whirl toward second and throw out the lead runner, but he took his eye off the ball for a second, dropped it, and had no choice but to throw to first. Now Johnson was darting off second base. Hendley focused on the hitter, Jim Lefevbre, which allowed Johnson to take off for third. Cubs catcher Chris Krug threw to Santo, but the Cubs great couldn’t handle the throw. Johnson ran home with the first and only run of the game. The Dodgers had scored without the benefit of a hit.

Hendley didn’t give up a hit until the 7th inning, and again it was hit by Lou Johnson. The ball barely lifted over Ernie Banks’ glove, and rolled into foul territory. Banks retrieved the ball, but not before Johnson was standing on second base with a double. It was the only hit of the game. Despite Hendley’s amazing one hit performance, Dodgers pitcher Sandy Koufax was even more outstanding.

The Cubs really only had two close calls. In the first inning Glenn Beckert hit a line drive down the line that was just a few feet foul, and in the sixth inning Don Kessinger was out by a step on a bang-bang play to the third baseman. If Junior Gilliam wasn’t playing in for the bunt, Kessinger would have beaten it out. The final out of the game was made by Cubs pinch hitter Harvey Kuenn, batting for pitcher Bob Hendley. Kuenn had been acquired from the Giants in the same trade that brought Hendley to the Cubs. He struck out.

It was probably the best game of Sandy Koufax’s Hall of Fame career. He didn’t allow a hit, didn’t walk a man, and didn’t allow anyone to reach base via error. He also struck out 14 Cubs batters, including Hall of Famers Ernie Banks three times and Billy Williams twice. Koufax faced the minimum 27 hitters; a perfect game. Bob Hendley is not remembered for his role in the game, but he also pitched a game for the ages. He walked one, allowed one hit, didn’t allow a single earned run, and became one of the toughest luck losers in baseball history.

The Cubs weren’t no-hit again until Cole Hamels did it in July of 2015.

September 4, 2002. Kelly Clarkson is named the winner of the first American Idol. The Cubs beat the Brewers 3-0 on a four hitter by Carlos Zambrano. Moises Alou goes 4 for 4 and drives in the winning run.

September 5, 1975. Gerald Ford survives an attempted assassination in California by Lynette “Squeaky” Fromme, a follower of Charles Manson. The Cubs are in Philadelphia splitting a double header with the Phillies. In the first game, Andre Thornton homers off Steve Carlton to lead the Cubs to victory.

September 6, 1901. President McKinley is shot in Buffalo, New York. He will die from his wounds eight days later. The Cubs (then known as the Orphans) are in Philadelphia. Their late rally falls short and they lose the game 3-2 to fall 23 games below .500.

September 7, 1996. Rapper Tupac Shakur is shot in Las Vegas. He will die in a hospital several days later. The Cubs are in Philadelphia. Mickey Morandini doubles and homers off his future teammate Steve Trachsel to lead the Phillies to a 4-2 victory.

September 8, 1974. President Ford pardons President Nixon. The Cubs are playing the Phillies at Wrigley Field, and enter the ninth inning down by five runs. Jerry Morales hits a grand slam to bring them within one run, but Pete LaCock pops out to end the game.

September 9, 1893. President Cleveland and his wife welcome the birth of a baby girl in the White House. Esther Cleveland remains the only child of a president to be born in the White House. The Cubs (then known as the Colts) are hosting the Phillies at West Side Grounds. Philadelphia comes away with a 6-4 win.

September 10, 1919. New York City holds a parade for World War I veterans. Their baseball team the Giants are in Chicago to play the Cubs at Cubs Park. Former Cub Heinie Zimmerman leads them to a 7-2 victory over Claude Hendrix and the Cubs.

One Response to “Historical Events (September 4–September 10): Where were the Cubs?”