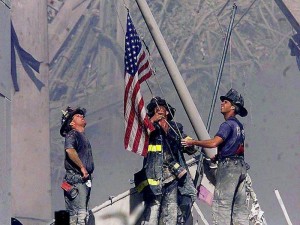 September 11, 2001
Terrorists crash passenger jets into the World Trade Center in New York, and the Pentagon in Washington. Another jet crashes in Pennsylvania. In all, nearly 3000 were people killed. America is in shock.

On what might have been the worst day in American history, the Cubs are at home, scheduled to face the Cincinnati Reds. They are in third place but still in the race, only six games behind the division leading Houston Astros.

Needless to say, after the terrorist attacks in New York, Pennsylvania, and Washington, all baseball games are canceled. In fact, the entire week’s games are canceled. When the season resumes the Cubs are on the road–and it isn’t kind to them. By the time the Cubs return to Wrigley Field on September 27th, they are out of the running.

But on that day, something truly memorable happens. Sammy Sosa hits a home run, his 59th of the season, and as he passes by first base, he pulls out a tiny American flag.

Sammy carries that flag around the bases during his home run trot–his tribute to his adopted country–a country still in mourning and shock. Say what you will about Sammy, but that one moment will remain a special one in the hearts and minds of every American who witnessed it.

September 11, 2001. The worst terrorist attack in American history kills nearly 3000 people in New York, Washington, and Pennsylvania. The Cubs have a game scheduled against the Reds at Wrigley Field. All MLB games are cancelled for that day and the following week. (full story above)

September 12, 1953. John F. Kennedy marries Jacqueline Bouvier in Rhode Island on the same day his future nemesis Nikita Kruschev is elected the successor to Joseph Stalin in the Soviet Union. The Cubs are hosting the Giants at Wrigley Field. Future Hall of Famers Ralph Kiner and Hoyt Wilhelm square off—and Kiner gets the best of Wilhelm, launching a home run and leading the Cubs to a victory.

September 13, 2004. Oprah gives away 300 cars to her audience in Chicago. The Cubs are in town too, defeating the Pirates 7-2. Greg Maddux pitches seven shutout innings for his 14th win of the season.

September 14, 1982. Princess Grace Kelly dies when her car drives off a mountain cliff in Monaco. Cubs pitcher Dickie Noles takes the news badly, because he gives up seven earned runs in just over three innings to the Pirates in Pittsburgh. Former Cub Bill Madlock knocks in six runs, and future Cub Richie Hebner hits a grand slam in the 15-5 Pirates win.

September 15, 1963. A bomb explodes during services in a Birmingham Alabama church, killing four African-American girls. Alabama native Billy Williams homers for the Cubs at Wrigley Field, but it’s not enough to win the game versus the Reds, as the Cubs fall 3-1.

September 16, 1981. Sugar Ray Leonard knocks out Thomas Hearns to win the middleweight title. The Cubs have the night off to watch the fight because their game was rained out against the Pirates at Wrigley Field.

September 17, 1978. The Camp David Peace Accords are signed by Israeli Prime Minister Menachem Begin and Egyptian President Anwar Sadat, after 12 days of talks with President Jimmy Carter. The Cubs slog through seven rainy innings at Wrigley to beat the Cardinals 4-2 before the game is called because of rain. Ivan DeJesus, Jerry White, and Dave Kingman all have three hits for the Cubs.