Historical Events (May 29–June 4): Where were the Cubs? 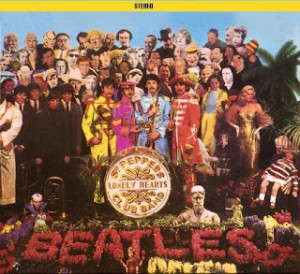 June 1, 1967
The Beatles, who have recently announced they will never tour again, finally release their new studio album. It’s called “Sgt. Pepper’s Lonely Hearts Club Band”, and is an immediate sensation. It’s dubbed an instant classic, and to this day is considered by many critics to be the best album ever recorded.

While the Beatles are taking in the worldwide adoration, the Cubs are in the midst of a resurgence themselves. At the beginning of June they are in the pennant race…something they haven’t really experienced in many years. As “Sgt. Peppers” hit the stores, the Cubs are playing well. Billy Williams has one of the best games of his life the day the album is released, hitting two homers and driving in six runs against the Cincinnati Reds. The Cubs have four future Hall of Famers (Billy, Ernie, Santo, and Fergie) on this 1967 team who will lead the team to several agonizing near misses over the next six seasons.

None of those Hall of Famers make the cover of “Sgt. Pepper’s Lonely Hearts Club Band” however. If you’ve ever wondered who those people on the cover were, here’s a complete list…(Thank you Wikipedia)

Other objects within the group include:
Cloth grandmother-figure by Jann Haworth
Cloth doll by Haworth of Shirley Temple wearing a sweater that reads “Welcome The Rolling Stones Good Guys”
A ceramic Mexican craft known as a Tree of Life from Metepec
A 9-inch Sony television set, apparently owned by Paul McCartney – the receipt, bearing McCartney’s signature, is owned by a curator of a museum dedicated to The Beatles in Japan.
A stone figure of a girl
Another stone figure
A statue brought over from John Lennon’s house
A trophy
A doll of the Hindu goddess Lakshmi
A drum skin, designed by fairground artist Joe Ephgrave
A hookah (water pipe)
A velvet snake
A Fukusuke, Japanese china figure
A stone figure of Snow White
A garden gnome
A euphonium/baritone horn

May 29, 1922. The Supreme Court rules that baseball is not a business, it’s a sport, and therefore exempt from anti-trust laws. The Cubs lose a heartbreaker in the 10th inning to the Cardinals at Cubs Park. Cliff Heathcote, who will be traded to the Cubs the next day, gets the game-winning hit.

May 30, 1911. The inaugural Indianapolis 500 is run at the Indianapolis Speedway in Indiana. Ray Harroun is declared the winner, and retires from racing. The Cubs lose to the Pirates 4-1 at Forbes Field as Big Ed Reulbach just doesn’t have it. He gets knocked out of the game in the third inning.

May 31, 1988. President Reagan concludes his summit with Soviet leader Mikhail Gorbochev in Moscow. The Cubs beat the Reds 4-0 at Wrigley Field; a four-hit shutout by rookie pitcher Jeff Pico.

June 2, 1886. President Grover Cleveland gets married in the White House to Frances Folsom. The Cubs (then known as the White Stockings) beat the Boston Beaneaters 9-0 in Boston.

June 3, 1989. The Chinese government begins a crackdown against protestors at Tiananmen Square. The Cubs lose to the Cardinals 6-5 in the bottom of the 10th at Busch Stadium. Ozzie Smith scored the winning run on a sacrifice fly.

June 4, 1919. Congress passes the 19th Amendment to the U.S. Constitution, guaranteeing women the right to vote. It will take effect the following year. The Cubs lose a heartbreaker to the Pirates in the 10th inning at Cubs Park, 1-0. Pirates pitcher Earl Hamilton knocked in the only run.