Historical Events (July 3–July 9): Where were the Cubs? 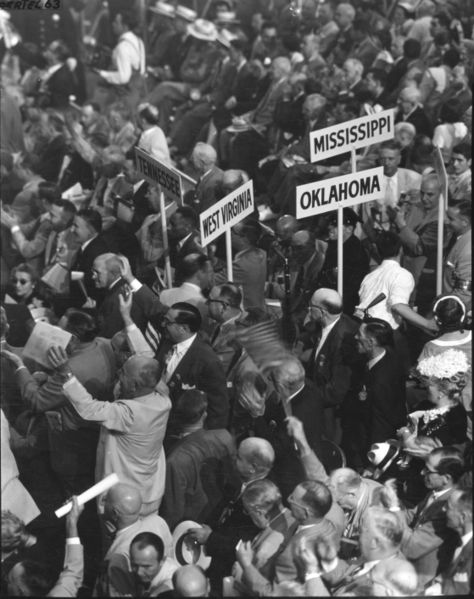 July 7, 1952
The 1952 Republican National Convention is held at the International Amphitheatre from July 7 to July 11, 1952. The Republicans nominate Dwight D. Eisenhower for president. The former general is still immensely popular. As his running mate, they name the anti-communist crusading Senator from California, Richard Milhous Nixon.

The Republicans were united on one pressing issue: ending the unpopular war in Korea. Their platform that year also promises to fire all “the loafers, incompetents and unnecessary employees” at the State Department, and pledges to bring an end to “Communist Subversion” in the United States.

The Brooklyn Dodgers are in town the same week as the Republicans. The Dodgers are the best team in the National League, and bring in big box office draws like Jackie Robinson and Duke Snider, not to mention long-time Cubs favorite Andy Pafko, who is now their starting left fielder.

Fans in the left field bleachers those two days get quite a treat. They are within screaming distance of their former favorite Pafko, and their current favorite, the MVP of the league that year—Hank Sauer. The teams split the two games.

Hopefully the fans in the bleachers didn’t engage in their usual favorite pastime—-betting–because the Cubs beat the ace of the Dodgers staff (Erskine), and lost to journeyman Clem Labine. Johnny Klippstein won the first game in relief of Bob Rush for the Cubs.

July 3, 1971. Doors lead singer Jim Morrison dies of heart failure in a bathtub in Paris at the age of 27. The Cubs beat the Pirates at Wrigley Field 3-1. Milt Pappas goes the distance for the Cubs and Don Kessinger hits a rare home run.

July 4, 1976. The United States celebrates its Bicentennial amid much fanfare from coast to coast. The Cubs are in New York, playing a double header against the Mets. They split the two games. In the second game, Ray Burris outduels Mickey Lolich 4-2, and Mick Kelleher has a rare good day at the plate, going 3 for 3, with two RBI.

July 5, 1921. The Black Sox trial begins in Chicago. The team is accused of throwing the 1919 World Series. The Cubs are in Pittsburgh, spanking the Pirates 10-2. Fred Merkle hits two doubles and a triple.

July 6, 1947. George “Bugs” Moran, the intended victim of the St. Valentine’s Day Massacre is finally captured by the FBI. His favorite team, the Cubs, are in Pittsburgh playing a double header against the Pirates. They lose both games. In the second game Cubs starter Russ Meyer doesn’t make it out of the first inning.

July 7, 1930. The building of the Hoover Dam begins. The Cubs lose to the Reds at Redland Field in Cincinnati. Cubs ace Pat Malone is the losing pitcher.

July 8, 1918. Ernest Hemingway is wounded by a mortar shell while serving as an ambulance driver for the American Red Cross in Italy. His favorite team, the Cubs, are in first place and hosting the second place New York Giants for a double header at Weeghman Park. Lefty Tyler wins the opener, and Claude Hendrix is beaten in game two.

July 9, 1948. Satchell Paige makes his debut with the Cleveland Indians at the age of 42. The still all-white Cubs host the Pirates at Wrigley Field. Bill Swish Nicholson’s 2-run homer propels Cubs to a 2-1 victory.

One Response to “Historical Events (July 3–July 9): Where were the Cubs?”