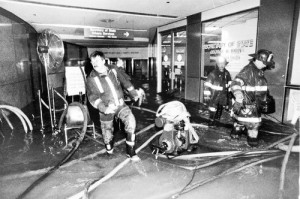 The city of Chicago was undergoing one of the strangest events in it’s colorful history. 250 million gallons of water were flooding the basements of Loop office buildings and retail stores because workers doing rehabilitation work on the Kinzie Street Bridge crossing the Chicago River didn’t know about an abandoned tunnel beneath the river, and drove a pylon into the tunnel wall. The city had to evacuate the area because they feared electrical wires would short out. Trading at both the Chicago Board of Trade Building and the Chicago Mercantile Exchange was stopped. (Photo: Chicago Tribune) Workers attempted to plug the hole, by then about 20 feet wide, with 65 truckloads of rocks, cement, and mattresses. That odd vision of mattresses being thrown into the river is one that Chicagoans won’t soon forget.

While the city flooded, the Cubs got swept by eventual division champion Pittsburgh. Batting second for the Cubs and playing centerfield was a young player the Cubs had gotten from the Chicago White Sox in spring training—-Sammy Sosa. Unfortunately for Sammy, his first Cubs season was a painful one. He missed most of June and July with a broken finger, and then returned only to break his ankle on August 6th. He missed the rest of the year. At the time, the Sammy trade was considered so terrible by Cubs fans, that they speculated Cubs GM Larry Himes (a former White Sox GM) was actually a White Sox spy sent to infiltrate the Cubs organization. The player the Cubs traded away to get Sammy, George Bell, had a few very good years on the South Side while Sammy was struggling mightily on the North Side. Those theories quickly vanished after Sammy hit 500+ home runs for the Cubs.

April 10, 1970. Paul McCartney announces the breakup of the Beatles. The Cubs beat the Expos 2-1 in Jarry Park. Johnny Callison hits a 2-run homer in the ninth to win it.

April 11, 1963. U.S sends troops to Vietnam for first time. Cubs beat the Dodgers at Wrigley Field, 2-0. Dick Ellsworth pitches a shutout and Ken Hubbs goes 3 for 3 with an RBI.

April 12, 1981. The first Space Shuttle is launched. The Cubs lose to the Mets at Wrigley Field, 2-1. Rawley Eastwick gives up the winning run in the ninth.

One Response to “Historical Events (April 10-16): Where were the Cubs?”