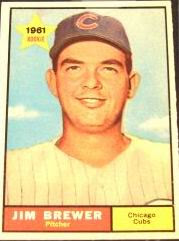 ~Jim Brewer 1937–1987 (Cubs 1960-1963)
Jim Brewer was a rookie pitcher for an unbelievably bad Cubs team in 1960. He was a little bit wild, and was having trouble controlling his pitches, and on one very unfortunate August day (8/4/60), he threw a fastball behind Cincinnati Reds infielder Billy Martin’s head (yes, that Billy Martin). Martin didn’t do anything immediately. Instead he waited for the next pitch and “accidentally” lost control of his bat, which went sailing right at Brewer. Brewer stepped down from the mound and said: “You little dago son of a bitch.” That led Martin to charge the mound. It wasn’t a lengthy fight, but Martin did get one good punch into Brewer’s face, shattering his cheekbone and putting him in the hospital for two weeks. Brewer later sued Martin for a million dollars. Martin was suspended and fined, and the lawsuit went all the way to a jury trial. Jim Brewer was awarded $10,000. It took Billy Martin several years to pay it off. The Cubs traded Brewer in 1963 to the Dodgers (for Dick Scott), and he later pitched in three World Series for them. (Photo: Topps 1961 Baseball Card)

~Xavier Nady 1978– (Cubs 2010)
The well-traveled veteran had played for the Padres, Mets, Yankees, and Pirates before coming to Chicago as a free agent signing in 2010. The Cubs hoped he could start at an outfield position or first base for them, but Nady was often hurt, and he never quite put it together. In over 300 at-bats, he managed to hit only six homers. The Cubs allowed him to leave after the season and he has since played for the Diamondbacks, Nationals, Giants, and Padres. His 2012 Giants team won the World Series.

~Kent Bottenfield 1968– (Cubs 1996-1997)
Kent pitched for eight different clubs in his nine-year big league career, switching between the starting rotation and the bullpen. With the Cubs he was a reliever, and appeared in 112 games over two seasons. Two years later the Cardinals put him in the starting rotation, and Bottenfield responded with an 18-win season and an All-Star appearance.

~Willie Hernandez 1954– (Cubs 1977-1983)
Willie was a pretty good relief pitcher for the Cubs in the late 70s and early 80s, pitching in over 50 games during five of his six Cubs seasons. The Cubs traded him to the Phillies for Dick Ruthven in 1983. Ruthven won a total of 22 games for the Cubs in four mediocre seasons. Hernandez went on to pitch in the World Series for the Phillies in 1983. He also won the MVP and Cy Young after leading the 1984 Detroit Tigers to the World Series championship. (Photo: Topps 1978 Baseball Card)