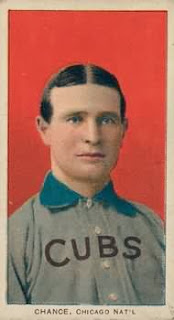 ~Frank Chance 1876–1924 (Cubs 1898-1912)
His real name was Frank Chance, but even his teammates called him “The Peerless Leader.” (Sometimes they just shortened it to “PL”). He was the undisputed leader of the best Cubs team in history, the Cubs of the ’00s. With the Peerless Leader at the helm, they won four pennants and two World Series titles. He allowed the boys to have their fun (he usually bought drinks and played cards with them), but in exchange he expected them to shut down the festivities at midnight the night before games, and to play their hardest during the games. He led by example. Anyone who wondered how to perform merely needed to watch the way Chance fiercely defended his turf and teammates. He was known as a brawler, and he was so unafraid in the batter’s box he was beaned more times than any player of his era, and more times than any other Cubs player in history. (Complications from those beanings eventually ended his career, and probably shortened his life). Chance was a fierce competitor. James J. Corbett, heavyweight champ, called him “one of the best amateur fighters I`ve ever seen.” One time he provoked a riot by punching out Giants pitcher Joe McGinnity at the Polo Grounds. Another time he threw a bottle into the stands at fans in Brooklyn. Chance and his double play mates (Tinker and Evers) were inducted into baseball’s Hall of Fame in 1946. Unfortunately for Frank, he had already been dead for 22 years.

~Michael Bowden 1986– (Cubs 2012-2013)
The Cubs acquired Bowden in the deal that sent Marlon Byrd to the Red Sox. Bowden was a local boy who grew up in nearby Aurora. He became a valuable member of the bullpen for two seasons, appearing in 64 games. After the 2013 season, Bowden left via free agency and signed a contract to pitch in Japan.

~Edwin Jackson 1983– (Cubs 2013-2015)
Jackson was the first free agent signed by the Theo Epstein regime (4 year, $40 million), and let’s just say they don’t exactly advertise that on their business cards. Edwin came to Chicago with decent credentials. He had pitched a no-hitter, and appeared in two World Series and one All-Star game, but it didn’t worked out for Edwin with the Cubs. In 2013 he lost a whopping 18 games, and finished with an ERA of nearly five. In 2014, he was worse. He did play a part in setting a record with the Cubs, however. He and Michael Bowden combined to throw five wild pitches in one inning. In his last season with the Cubs (2015), he pitched exclusively out of the bullpen. The Cubs released him at the end of July, and he finished the year with the Atlanta Braves. He has since gone on to pitch for Miami, San Diego, Washington, Baltimore, Oakland, Detroit and Toronto. Edwin has now pitched for more different teams than any player in history.

~Todd Zeile 1965– (Cubs 1995)
Zeile had a stellar 16-year career as a third baseman, catcher, and first baseman, but only half of one season was with the Cubs. The Cubs acquired him in 1995 for pitcher Mike Morgan, but Zeile was a free agent at the end of the year, and signed with the Phillies. He also played for the Cardinals, Dodgers, Orioles, Marlins, Rangers, Mets, Rockies, Yankees, and Expos. In his career he hit over 250 homers. Nine of those were with the Cubs. He may have been a good power hitter, but Zeile was a bit of a butcher in the field. He had more errors in the 1990s than any other player in baseball.

~Jerry Mumphrey 1952– (Cubs 1986-1988)
Mumphrey was an excellent hitter. His lifetime batting average (with nearly 5000 career at-bats) was .289. He also hit very well with the Cubs, posting averages of .304 and .333 in his first two seasons. But Jerry wasn’t really an everyday player anymore at that point in his career. He was essentially a fourth outfielder. In retrospect, he probably wasn’t worth the price the Cubs paid to get him: future World Series hero Billy Hatcher.

~Ed Mickelson 1926– (Cubs 1957)
Ed was mainly a career minor leaguer, but he did get three cups of coffee in the big leagues. His last one was with the Cubs in 1957. The first baseman was used mainly as a pinch hitter, and was 0 for 12. His most notable achievement in the big leagues occurred in 1953. He knocked in the final run in St. Louis Browns history. The team moved to Baltimore in 1954.

~Abner Dalrymple 1857–1939 (White Stockings 1879-1886)
Dalrymple was the starting left fielder for the Cubs (then known as the White Stockings) when they dominated the National League in the 1880s. They won five championships during his seven years. Unfortunately, team owner Al Spalding didn’t like the way they did it. They were known as a bunch of rowdy hell-raisers and drinkers. After the 1886 championship season, Spalding dismantled the team, sending all the drinkers (including Abner) to other teams. They didn’t win another championship until 1907. Abner finished his career in Pittsburgh. 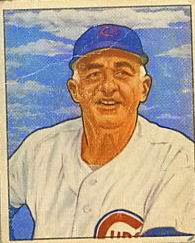 ~Frankie Frisch 1898–1973 (Cubs manager 1949-1951)
Frankie Frisch was nicknamed the Fordham Flash because he attended Fordham and he was a big base stealer during his playing career (1919-1937). Frisch is a Hall of Famer as a player, and a World Series champ as a player/manager with the St. Louis Cardinals in 1934 (he also won 3 other series as a player). But the Fordham Flash had no chance as a manager of the simply terrible late 40s, early 50s Cubs. He was warned not to take the job by everyone before it was offered, but he took it anyway, and crashed and burned. His teams finished 8th, 7th, and 8th. He was fired after he was caught reading a novel in the dugout DURING a game. It turned out to be his last managing job. (Photo: 1951 Bowman Baseball Card)