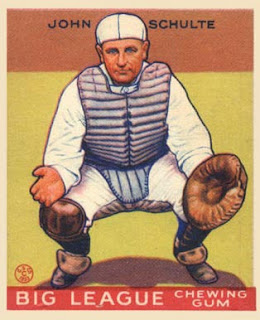 ~Johnny Schulte 1896–1978 (Cubs 1929)
Schulte was a backup catcher for the Cubs (and the Browns, Cardinals, Phillies, and Braves). His one season in Chicago just happened to be a pennant-winning year, although Johnny didn’t get to play in the World Series against the A’s. After his playing career he became a coach, and was on the staff of many World Series champions with the Yankees. He also worked as a scout for ten years. (Photo: 1933 Goudy Baseball Card)

~Casey Wise 1932–2007 (Cubs 1957)
Wise came up to the big leagues with the Cubs in 1957. The second baseman/shortstop got the most extensive playing time of his big league career that season, appearing in 43 games and hitting .256. The Cubs traded him to the Milwaukee Braves after the season for pitcher Ben Johnson and outfielder Chick King. After his playing career ended, Wise became a dentist.

~Al Demaree 1884–1962 (Cubs 1917)
Not to be confused with Cubs outfielder Frank Demaree (no relation), this Demaree was a right-handed starting pitcher for the Cubs. He was a 19-game winner with the Phillies when Chicago acquired him 1917 (in exchange for Jimmy Lavender), but he got off to a slow start with the Cubs and was traded to the Giants before the season was over. While he was still playing he became a cartoonist. The Sporting News printed a bunch of his cartoons, and that’s what he did for a career after his playing career ended.