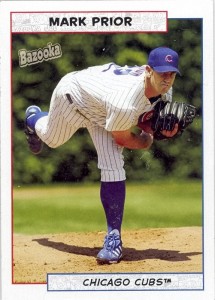 ~Mark Prior 1980– (Cubs 2002-2006)
Prior was considered the franchise. He was the second overall pick of the draft, and he pitched like it initially. He finished in the top ten in Rookie of the Year voting in 2002, and then put it all together in 2003. He won 18 games, struck out 245, and looked virtually unbeatable. He was on the mound during the infamous Steve Bartman moment, five outs away from securing the Cubs a spot in the World Series. We all know what happened then. The next year Prior got hurt, and try as he might to rehab, other than occasional flashes of his old self, he became a middle-of-the-rotation starter. By 2006 his injuries were serious enough to require surgery, and Prior hasn’t pitched in the big leagues since. (Photo: Bazooka 2005 Baseball Card)

~Wade Davis 1982– (Cubs 2017)
The Cubs acquired the closer from Kansas City for Jorge Soler before the 2017 season, and the veteran reliever had the best season of his career. He saved 32 games in 33 chances, struck out 79 batters in 58 innings, and was the lone Cubs representative in the 2017 All-Star game. By the end of the season, however, Davis was pitching on fumes. He performed heroically in the NLDS against the Nationals, but had very little left in the tank during the 2017 NLCS. He did save their only win of the series, but he wasn’t the same pitcher that he was during the regular season. After the season ended, Davis became a free agent and signed with Colorado.

~Wade Rowdon 1960– (Cubs 1987)
Rowdon was a backup third baseman who played only eleven games for the Cubs in 1987. He hit .226 in 34 plate appearances. Before being called up to the big league club, he hit homers in four consecutive at-bats for Iowa. He later played in Japan.

~Reggie Otero 1915–1988 (Cubs 1945)
The Cuban-born first baseman was a rookie for the 1945 Cubs, but he was no spring chicken. When he made his major league debut he was just a few days shy of his 30th birthday. Otero spelled Phil Cavarretta for a few games in September, but that’s the extent of his major league career. He may not have had much time in the bigs, but he did end up with a .391 average in his 23 at-bats. Not a bad lifetime average.

~Bill McAfee 1907–1958 (Cubs 1930)
McAfee faced exactly ten batters while pitching in a Cubs uniform. Unfortunately for him, it was the year of the hitter, and five of those ten batters reached base. The right-hander later pitched for Washington, Boston, and the St. Louis Browns. After his playing career, he was elected Mayor of his hometown of Albany, Georgia. He died in a plane crash in 1958.

~Curt Davis 1903–1965 (Cubs 1936-1937)
The Cubs were the defending National League champions when they traded future Hall of Famer Chuck Klein (a relative disappointment with the Cubs) back to the Phillies for Davis and a speedy left fielder near the end of his career: Ethan Allen. Davis was known as Coonskin, and he pitched for the Cubs for two seasons. Curt was an All-Star in his first season with the Cubs and then won 10 games the following year (1937). The Cubs traded him to the Cardinals in 1938 for Dizzy Dean. How many players can say they were traded for Hall of Famers twice? It sounded like a good deal for the Cubs at the time, but the Cardinals surely got the better of the deal. Davis went on to win 100 more games (including 22 one year with the Cards), while Dean won only 22 more games in his entire career. Davis later pitched for Brooklyn during the war years and became buddies with an author who lived near the Dodgers’ spring facility in Cuba…Ernest Hemingway.