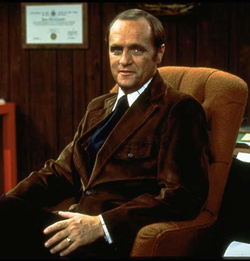 ~Bob Newhart 1929– (Cubs fan 1929-present)
Bob Newhart was born and raised in Chicago. He went to St. Ignatius High School on the West Side, and grew up rooting for the Chicago Cubs. He got his big break when a Chicago DJ named Dan Sorkin played a funny tape Bob made to entertain his colleagues. Newhart was a 30-year-old accountant — still living at his parents’ house — when his star started to rise. He decided to switch careers and give comedy a go in the late ’50s. The Buttoned Down Mind Of Bob Newhart — which outsold Beatles albums in the ’60s — made him a superstar. When Bob got his first network sitcom, he naturally set the show in Chicago. His character’s home was this building at 5901 N. Sheridan on the city’s north side. His office was near the river on Michigan Avenue. And during one memorable episode, Bob counseled a struggling pitcher for the Chicago Cubs. Newhart has lived in LA for nearly 50 years now, but he remains a Chicago Cubs fan. One day backstage at a Tonight Show taping, John Belushi ran into Newhart and asked him if he remembered going to a Chicago Cubs game years earlier and autographing baseballs for kids between innings. “I was one of those kids,” said Belushi. Added Newhart, “Cubs lost.” In an interview with the Daily Herald in 2011, he recalled “I will always remember 1945 when I was 16 years old and the Cubs had won the national league pennant. I went and watched as the Cubs paraded down LaSalle Street.”

~Tyler Colvin 1985– (Cubs 2009-2011)
Colvin was a first round pick for the Cubs in 2006, and made it up to the big leagues just a few years later. He got extensive playing time for the Cubs in 2010 and hit 20 homers, but his season ended in a very scary way. He was a runner on third base when a jagged piece of a broken bat flew in the air and stabbed him in the chest. He had to miss the rest of the year. The following year, Colvin never quite got in the flow of things. He hit only .150 and was sent back to the minors. When the Epstein era began in 2012, Colvin was traded to the Rockies (along with DJ Lemahieu) for Ian Stewart.

~Cliff Bartosh 1979– (Cubs 2005)
Bartosh was acquired from the Indians just before the 2005 season began, and the lefty made nineteen appearances before being sent to the minor leagues. That ended up being his final season in baseball.

~Candy Maldonado 1960– (Cubs 1993)
Candy Maldonado had several good seasons…none of them with the Cubs. He arrived in town during the offseason the Cubs got rid of two Hall of Famers: Greg Maddux and Andre Dawson. Maldonado was supposed to replace Dawson. He didn’t. Candy hit .186 in 70 games and was traded to the Indians for GlenAllen Hill.

~Lefty Leifield 1883–1970 (Cubs 1912-1913)
One of the great names in baseball history, Lefty was a 20-game winner with the Pirates before coming to the Cubs. He was known as a pitcher who didn’t have good stuff, but managed to keep hitters off balance by throwing it where they couldn’t hit it; the prototypical soft-tossing lefty. In parts of two seasons, he won seven games with the Cubs. Lefty coached for the Browns, Tigers, and Red Sox after his playing career ended.

~Ed Stein 1869–1928 (Colts 1890-1891)
Ed was a starting pitcher for the Cubs (then known as the Colts) and had a few fairly good seasons, but it wasn’t until he got to Brooklyn that Stein really showed what he could do. He won 27 games and 26 games in two different seasons for Brooklyn.