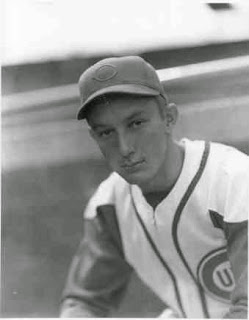 ~Eddie Waitkus 1919–1972 (Cubs 1941-1948)
Eddie Waitkus was a fresh-faced young first baseman for the Cubs who joined the Cubs briefly in 1941 before being drafted into the military. He returned for the 1946 season as a highly decorated military hero (four battle stars) and promptly took over the starting job, batting over .300 that year. Waitkus was known for his great defense, his smoking line-drives, and his left-handed bat. The pinnacle of his Cubs career came in 1948, when he made the All-Star team. After the 1948 season the Cubs decided they needed to boost their pitching staff, so they traded the popular Waitkus to the Phillies for two aging starting pitchers (Dutch Leonard and Monk Dubiel). Many people in Chicago were very upset by that trade, but nobody was more upset than young Ruth Ann Steinhagen, who had pined for Waitkus since the 1941 season, when she was only 11 years old. She attended games whenever she could and kept an encyclopedic scrapbook of pictures and clippings of Waitkus. How obsessed was she? She heard that Eddie was Lithuanian, so she studied the language. Needless to say, 18-year-old Ruth Ann’s world was shattered when Waitkus was traded. Eddie had no idea who Ruth Ann was, but he would find out soon enough. He was hitting over .300 for Philadelphia, and was leading all NL first basemen in All-Star game balloting when the Phillies came to Chicago on June 14, 1949 to play the Cubs at Wrigley Field. He must have felt vindicated when his Phillies trounced the team that traded him, 9-2. He had a celebratory dinner that night with his teammate Russ Meyer and Meyer’s parents and fiancé. Nothing seemed out of the ordinary when they returned to the Edgewater Beach hotel around 11:00 that night. There was a note waiting for Eddie there, from a “Ruth Ann Burns,” a girl Eddie had been dating. The note simply said that Ruth Ann was staying in room 1297. Excited to see her, Eddie quickly went to room 1297 and knocked on the door. Instead of Ruth Ann Burns, however, another girl was waiting for him there. She claimed to be Ruth Ann’s friend. Thinking it was perfectly conceivable, Eddie took her up on the offer. He was sitting in a chair in room 1297 when Ruth Ann Steinhagen emerged from the closet holding a 22-caliber rifle, and said…”If I can’t have you, nobody can.” Then she shot him in the chest. As Eddie slumped to the ground in agony, Ruth Ann Steinhagen calmly picked up the phone and told the front desk that she had just shot Eddie Waitkus. That phone call probably saved his life. The bullet narrowly missed his heart, and miraculously missed all of his other major organs, but he surely would have bled to death. As it was, it took several hours in the operating room to successfully remove the bullet. When it came time to punish Ruth Ann Steinhagen, Eddie refused to push for a harsh sentence. He did not attend the trial, and never saw her again. When asked about her, he simply replied: “She had the coldest-looking face I’ve ever seen.” This shooting, which was a huge nationwide story, surely influenced author Bernhard Malamud, who published his novel The Natural only three years later. Eddie, by the way, returned to the big leagues, and played until 1955. Ruth Ann was institutionalized for a few years, but was then declared sane and released, and lived in Chicago until her death in 2012.

~Red Corriden 1887–1959 (Cubs player 1913-1915, Cubs coach 1930s)
John “Red” Corriden was a controversial pickup by the Cubs in 1913. At that time, the shortstop and third baseman was probably best known for the way he helped Nap Lajoie win the batting title in 1910 over the universally hated Ty Cobb. Corriden played back on purpose and allowed Nap to get enough bunt singles to win the title. He was mainly a backup as a player for the Cubs, but he returned to the team during their heyday in the 1930s as a coach. He was on the staff of the teams that went to the 1932, 1935, and 1938 World Series. Red later managed the White Sox. How much of a baseball man was he? He died at the age of 72 while watching a crucial Milwaukee Braves — LA Dodgers game on television at the end of the 1959 season. Red got his nickname the same way every other player named Red got his. He was a redhead.

~Jim McAnany 1936–2015 (Cubs 1961-1962)
McAnany was a backup outfielder for five big league seasons, all of which were in Chicago. The first three were on the south side (including the ’59 World Series season), and the last two were with the Cubs. Over two seasons with the Cubs, he got 18 plate appearances and managed to scrape out a total of three hits.