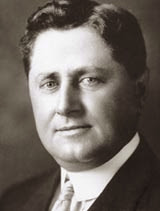 ~William Wrigley Jr. 1861–1932 (Cubs owner 1918-1932)
William Wrigley LOVED baseball. He didn’t buy the Cubs as an investment. He bought the team because he loved the game, and had since he was a boy in Philadelphia. It killed him that his dad made him work at a young age, because every day he walked by the ballpark and heard the cheers, he wished he could go in and watch. He would tell his father that the relatives of his boyhood chums had died so that he could play hooky and go to the ballgame. He resolved that if he ever got a chance, he would own a baseball team one day. Wrigley made his fortune in the chewing gum business, itself an act of accidental success. He started his business in Chicago selling his father’s Wrigley’s Scouring Soap. One day in 1892, he got the idea of offering two packages of chewing gum as an added incentive. The chewing gum was so popular he realized that he should concentrate on that, and he did. He began marketing it under his own name, and by 1893 Wrigley’s Juicy Fruit gum and Wrigley’s Spearmint gum were huge hits, and William Wrigley was a millionaire. By 1918 he was one of the most prominent citizens of Chicago, and had become an investor in the Cubs. When owner Charlie Weeghman couldn’t sustain his finances, Wrigley took over as the majority owner, and finally realized his boyhood dream. He hired Bill Veeck Sr. that year, and with baseball lovers Wrigley and Veeck at the helm, the Cubs returned to their former glory. They won the pennant in both 1918 and 1929, and laid the groundwork for a team that would dominate the National League in the 1930s. Sadly, Wrigley wasn’t around to see it. He died in 1932 before the Cubs made the World Series that year. On his deathbed he made his son Phillip promise never to sell the team. Even though Phillip didn’t much care about baseball, he honored his father’s wish and held on to the team until his death in 1977. Under the son, the Cubs atrophied and became the worst team in baseball, but they still played, and continue to play in the stadium that is named after his father, baseball lover William Wrigley.

~Curtis Goodwin 1972– (Cubs 1999)
Curtis was with the Cubs the first few months of the 1999 season. The speedy center fielder hit .242 in 175 plate appearances, but was put on waivers in August of that year. He previously had two good 20+ stolen base seasons with the Orioles and the Reds. 1999 was his last season in the big leagues.

~Doug Jennings 1964– (Cubs 1993)
Jennings was a backup outfielder with Oakland for four seasons before coming to Chicago. The Cubs used Jennings as a pinch hitter and occasional first baseman. He was fairly effective in that role, hitting .250 with two homers. It was his last season in the big leagues. His next stop was Japan.

~Yorkis Perez 1967– (Cubs 1991)
Part of the Perez family that also brought Melido, Pascual, and Carlos Perez to the majors, cousin Yorkis was a September call-up for the Cubs in 1991, but only appeared in three games. Despite pitching fairly well, the Cubs let him go after the season. It took Perez a few years to make it back up to the big leagues, but he eventually pitched eight more seasons for the Marlins, Mets, Phillies, Astros, and Orioles.

~Hal O’Hagan 1869–1913 (Orphans 1902)
Hal had a strange career. He had a cup of coffee in the big leagues with Washington in 1892, and then went back to the minor leagues for ten years. In 1902, he was suddenly in great demand by everyone in the big leagues again. He was a backup first baseman for several clubs, including the Cubs (then known as the Orphans). He started the season in Chicago, but also played for New York, Cleveland, and then New York again the same season. Hal hit only .184 that year. After his vagabond MLB travels in 1902, he went back to the minors for five more years. Just five years later, Hal passed away at the age of 43.

~Dave Magadan 1962– (Cubs 1996)
Magadan was a professional hitter. In nine of his sixteen big league seasons he hit .280 or better, including a .328 season in 1990, good for 3rd in the league. His career on-base percentage was also outstanding. At .390, it’s the 101st best in baseball history. But when he was with the Cubs, Magadan wasn’t anywhere near that level. He hit only .254 as a part-time third baseman. After his playing career ended, Mags (as he was called by his teammates) went into coaching. His cousin (and godfather) was also a famous coach/manager. Perhaps you’ve heard of him: Lou Piniella.

~Carlos Lezcano 1955– (Cubs 1980-1981)
The Puerto Rican center fielder got a cup of coffee with the Cubs in the early 1980s. Unfortunately, he was a bit overmatched by big league pitching, and posted a .186 average. That was his only stint in the majors. After his playing career he went into coaching with the San Diego Padres farm system.

~Alex Hardy 1876–1940 (Cubs 1902-1903)
Hardy was a Canadian-born pitcher who started seven games over two seasons for the Cubs more than a hundred years ago. He went 3-3, with a 4.34 ERA. Of the seven games he started, he completed five of them. After his playing career ended, he moved back home to his native Ontario. 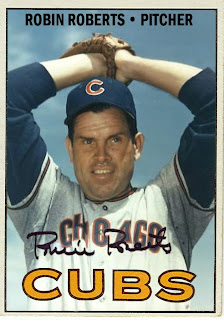 ~Robin Roberts 1926–2010 (Cubs 1966)
He is a Hall of Famer, a seven-time All-Star, a six-time 20-game winner, a man that led his team to the pennant as a 23-year-old, made the cover of Time Magazine, and ended up with 286 career wins. Roberts led the league in wins four times, strikeouts twice, and complete games five times. Of course, none of that happened during his short stint with the Cubs. The Cubs thought they should give him one last chance. Unfortunately, he was the oldest player in the majors (39) when he was picked up by the Cubs in 1966, and he didn’t have anything left in the tank. The head and heart were willing, but the arm was not. In his nine starts with the Cubs, his ERA was over six, and he gave up eight home runs. Those just added to his record-setting total. Roberts served up more home runs than any other pitcher in history. One of his teammates on the 1966 Cubs is now second place on the all-time home run list: Ferguson Jenkins. The Cubs released Roberts on October 4, 1966. He never pitched in the majors again. (Photo: Baseball card created by Cardsthatneverwere.blogspot.com)