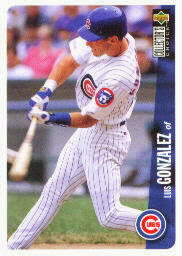 ~Luis Gonzalez 1967– (Cubs 1995-1996)
Luis Gonzalez obviously got his nickname from his last name, because he already had it when he was on the Cubs, and he obviously didn’t hit like a Gonzo in Chicago (22 home runs in his 1 ½ years with the team). It’s not as if Gonzo’s Cubs career was a total flop, however. He was acquired mid-season in 1995 (along with catcher Scott Servais), and helped lead the team to a surprising third place finish that strike-shortened season. In 1996, he had a very solid season (15 HR, 79 RBI, .271 Ave), but because he was a corner outfielder, the Cubs felt they needed more power out of that position and allowed him to leave via free agency. Ironically, Gonzo discovered his power stroke very soon after leaving Chicago. He hit 23 HRs for the Tigers in 1998, and then really blossomed in 2001, when he hit 57 home runs and finished 3rd in the MVP voting. He also got the game-winning hit in Game 7 of the World Series that year. Still, Gonzo enjoyed his time in Chicago immensely. One of his most treasured possessions is a ball thrown to him before he filed for free agency in 1997, signed by Wrigley Field’s bleachers bums.

~Chad Fox 1970– (Cubs 2005-2009)
Fox had a pretty good career as a reliever in Milwaukee before he came to the Cubs, but he spent most of his time in Chicago rehabbing from injuries. He missed the entire 2006 and 2007 seasons, and when he pitched in 2009 he suffered a gruesome injury — it looked like his arm was just dangling. His ERA that season was 135.00. That was the end of the line for Fox.

~Dave Clark 1962– (Cubs 1990, 1997)
Clark was a fourth outfielder for the Cubs during two different stints. The first time he shared left field with Dwight Smith. The second time he backed up both Doug Glanville and Sammy Sosa. Clark was a pretty good hitter (he hit .300 in his second stint with the Cubs), but he never really nailed down a full-time job in the big leagues. Nevertheless, he managed to play for 13 seasons, mostly with Pittsburgh. Clark is the only Cubs player in history born in the same town as Elvis Presley: Tupelo, Mississippi.

~Steve Boros 1936–2010 (Cubs 1963)
The Cubs acquired Boros from the Tigers (for Bob Anderson) before the 1963 season. He was a third baseman, and the Cubs had a young star named Ron Santo manning the position, so Boros didn’t get a lot of playing time. The Cubs sold him to the Reds the following year. After his playing career Boros became a statistical guru and scout. He managed the A’s and Padres and worked in the front office and scouted for the Tigers and Dodgers.

~Morrie Martin 1922–2010 (Cubs 1959)
Morrie was a lefty reliever, so naturally his nickname was Lefty. He was a World War II veteran who was badly wounded in Germany. He nearly had his leg amputated. But Martin worked his way back up to the big leagues. Lefty pitched for six clubs before coming to the Cubs in 1959 for his swan song. The song was off-key. He appeared in three games in April, and was released with an ERA of 19.29.

~Frank Jelincich 1917–1992 (Cubs 1941)
Jelly, as he was known to his teammates, spent most of his baseball career in the minors. His career lasted from 1937-1950, but he only got eight big league at-bats. They came for the Cubs in September of 1941. He got one hit, and knocked in two runs. Three months later Pearl Harbor was bombed, and Jelly found himself serving Uncle Sam. He never made it back up to the big leagues after his return.

~Dusty Miller 1876–1950 (Orphans 1902)
Miller played one season for the Cubs (then known as the Orphans), and it was his only season in the big leagues. The left-fielder hit .246 with ten stolen bases. The remainder of his career was spent in the minors. He retired the year of the Cubs World Series championship, 1908.

~Mike Kahoe 1873–1949 (Orphans 1901-1902, Cubs 1907)
Kahoe was a jack of all trades. He played mostly catcher (one of the few who wore shin guards in his day), but also got time at every infield position during his Chicago years. He skipped out of town in 1902 and joined the American League (St. Louis Browns). His big league career lasted eleven seasons. Kahoe came back to the Cubs in 1907 for a very brief stint during their first World Series championship year, but by the time the season ended, he was on Washington’s roster.

~Eddie Stanky 1916–1999 (Cubs 1943-1944)
They called him the brat because he was a professional irritant. Leo Durocher pegged him with his nickname when he said: “Look at Mel Ott over there [in the Giant’s dugout]. He’s a nice guy, and he finishes second. Now look at The Brat (Stanky). He can’t hit, can’t run, can’t field. He’s no nice guy, but all the little SOB can do is win.” Branch Rickey described Stanky the same way: “He can’t hit, he can’t run, he can’t field, he can’t throw, he can’t do a goddamn thing…but beat you.” The ultimate rub-some-dirt-in-it gritty second baseman started out as a Cub (1943), but was traded to the Dodgers halfway through his second season for a journeyman pitcher named Bob Chipman. The Cubs thought they had a better second baseman to replace him: Don Johnson. Johnson did start at 2B for the Cubs World Series team in 1945, but Stanky went on to play in three World Series, was named to three All-Star teams, led the league in on-base percentage twice, and most famously started the ninth-inning rally that culminated in Bobby Thomson’s pennant-winning home run. After his playing career was over he managed the White Sox (in ’66 and ’67 — while Durocher was managing the Cubs), and for one game in 1977, the Texas Rangers. He quit after one day because he couldn’t stand the modern

~Carl Edwards Jr. 1991– (Cubs 2015-2019)
The string bean slinger, as he is also known, was the key acquisition in the trade that sent Matt Garza to the Rangers. The Cubs also acquired Justin Grimm, Mike Olt, and Neil Ramirez in the deal, but Edwards was the top pitching prospect. He was brought up to the big league club toward the end of the 2015 season so he could get a taste of the winning atmosphere. He performed well in a relief role (4 Ks in 4 innings), but didn’t make the postseason roster. In 2016, however, Edwards became a crucial cog in the bullpen. Manager Joe Madden used him in more and more high pressure situations and Carl responded. He was on the mound in the 9th inning of the 7th game of the World Series, a moment he will surely never forget. In 2017, he became the primary set-up man for the Cubs and pitched well for most of the year, but during the playoffs the wheels came off. Edwards couldn’t find the plate and finished the NLDS with an ERA of 23.14. His 2018 was remarkably similar to 2017; flashes of brilliance followed by inexplicable ineffectiveness. The Cubs finally gave up on Carl during the 2019 season, and sent him to San Diego.