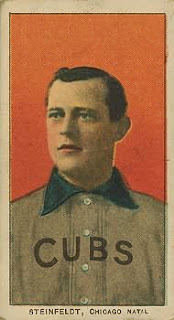 ~Harry Steinfeldt 1877–1914 (Cubs 1906-1910)
Harry was the forgotten man in the Cubs infield that also included Hall of Famers Tinker, Evers, and Chance, but he was every bit as important to that Cubs dynasty as any of them. If only his last name were a little more poetic — Franklin Adams may have included him in his famous poem. (In fairness to Adams, you try rhyming Steinfeldt.) Frank Chance considered Harry the final piece to the puzzle when he acquired him before the 1906 season, and boy was he right. Harry led the team in hits and RBI and batted .327 as the Cubs posted the best record in baseball history. The following year, Steinfeldt was the star of the 1907 World Series. He hit .471 to lead the Cubs to their first World Series championship. He was also the starting third baseman for the Cubs in the 1908 and 1910 World Series. Harry played briefly the next season with Boston, but his skills were obviously waning. After not being able to cut it in the minor leagues, he admitted defeat and retired. Harry Steinfeldt passed away of a cerebral hemorrhage in 1914 at the age of 36.

~Craig Lefferts 1957– (Cubs 1983)
Lefferts was a promising young rookie left-handed reliever with one good season under his belt when the Cubs included him in the trade that brought Scott Sanderson to the Cubs. Lefferts ended up in San Diego in that three-way trade, and had a very good career with the Padres as a reliever. Ironically, the highlight of his career was probably the 1984 NLCS against his old team, the Cubs. Craig appeared in three of those games and was the winning pitcher in both games that crushed the hearts and spirits of Cubs fans — the Garvey game (Game 4) and the Leon game (Game 5). He later also pitched against the Cubs in the 1989 NLCS for the San Francisco Giants. Lefferts saved over a hundred games in his twelve-year big league career. 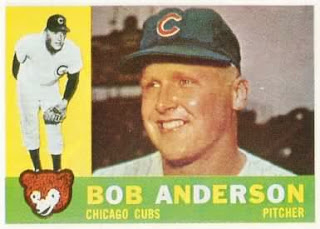 ~Bob Anderson 1935–2015 (Cubs 1957-1962)
Anderson was a key part of the Cubs starting rotation in the late 1950s. Among the highlights of those years: beating Don Drysdale on opening day at Wrigley Field in 1959, being on the mound that strange day when two balls were in play at one time (also in 1959), and pitching to left-handed catcher Dale Long in 1958. After the College of Coaches took over, Anderson was moved to the bullpen and wasn’t nearly as effective. (Photo: Topps 1960 Baseball Card)