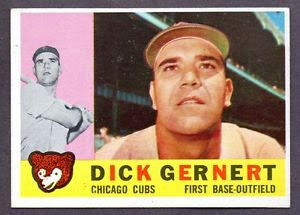 ~Dick Gernert 1928–2017 (Cubs 1960)
He was the nephew of fellow Cub Dim Dom Dallessandro. Gernert had a few good years with the Red Sox before coming to the Cubs. The outfielder/first baseman had 100 career homers on his resume when he arrived at Wrigley Field. Unfortunately for the Cubs, he didn’t hit any for the Cubs in 96 at-bats, and was sold by August of 1960. His final career homer came the following year for the Tigers. Gernert later worked in the front office for the Mets and Rangers. (Photo: Topps 1960 Baseball Card)

~Joey Nation 1978– (Cubs 2000)
Nation was one of the prospects the Cubs got in return from the Atlanta Braves for Jose Hernandez and Terry Mulholland. Apparently the Cubs scouts weren’t quite as sophisticated then as they are now. Nation may have been a second round draft choice of the Braves, but the left-handed pitcher never had a good season in the minors, let alone the big leagues. In his one taste of the big-time with the Cubs, he was lit up in two starts. The other prospects in that trade, Ruben Quevedo and Micah Bowie, were also lit up when they came to the big leagues.

~Dick Barrett 1906–1966 (Cubs 1943)
His nickname was “Kewpie Dick” because he resembled a Kewpie doll. Dick was a right-handed pitcher. The 37-year-old appeared in fifteen games for the Cubs during the war year of 1943, and didn’t win a single game. He had been a big league pitcher in the early 1930s and thought it would be a good time to make a comeback because so many players were in the military service. Barrett did get four more big league seasons thanks to the war, but even with slightly inferior competition, he had a rough go of it. His career record is 23 games below .500, and he lost 20 games in one season with the Phillies in 1945.

~Hank Grampp 1903–1986 (Cubs 1927-1929)
Grampp had a really unusual big league career. He was on the team’s big league roster for three years and literally pitched every single day —but only because the team used him as their daily batting practice pitcher. Over those three seasons he appeared in only three big league games, and was rocked pretty badly. But what would you expect? He had already thrown thousands of innings. Grampp wore his Cubs uniform for the final time during the 1929 World Series. He didn’t appear in any of those games, but he was there throwing batting practice. Years later he was hired by the team as a scout. 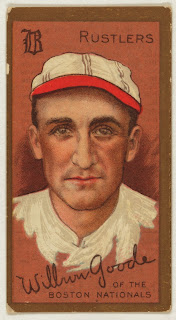 ~Wilbur Good 1885–1963 (Cubs 1911-1915)
Wilbur came to the Cubs in the trade that sent popular catcher Johnny Kling to Boston. His nickname was “Lefty” and he played for the Cubs in the years after their dynasty (1906-1910) and before their move to Wrigley Field (1916). Good was a backup outfielder his first few years in Chicago (he hit the first pinch hit HR in Cubs history in 1913), before being given the full-time right field job in 1914. Wilbur responded by stealing more than 30 bases and hitting .272. Those numbers went down the following year, and when the Cubs moved across town to Wrigley Field (then known as Weeghman Park), Wilbur was not invited to join them. He was sold to the Phillies. Good holds the distinction of being the very last player to hit a homer at West Side Grounds. It came on September 29, 1915 in a 5-4 victory over the Braves. Think of Wilbur on Groundhog Day. He’s the only Cub ever born in Punxatawney, Pennsylvania.