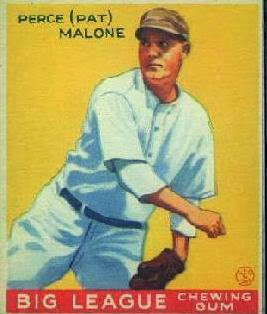 ~Pat Malone 1902–1943 (Cubs 1928-1934)
Malone was a two-time 20-game winner with the Cubs and led the team to the 1929 and 1932 World Series, but he also hung out with Hack Wilson. When they weren’t playing baseball, they were either drinking or brawling. The stories are legendary. In Malone’s first season with the Cubs his roommate was Percy Jones. They didn’t get along. Jones insisted on getting a new roommate after Malone trapped some pigeons on a hotel ledge and put them in Jones’ bed as he slept. One night Malone and Wilson got into a huge fist fight in a hotel. They were walking down the hallway of their hotel, and Wilson laughed. Someone in a hotel room mimicked his laugh. Wilson and Malone broke into the room and beat the hell out of four men, until all of them were out cold. One of the men was still standing and Malone kept punching. Wilson pointed out that he was already knocked out. “Move the lamp and he’ll fall.” Malone moved the lamp, and the man fell to the ground. It didn’t end well for either man. Wilson was only 48 years old when he drank himself to death. Malone didn’t even last as long as Hack. He was only 40 years old when he died in 1943. (Photo: 1934 Goudy Baseball Card)

~Tony Womack 1969– (Cubs 2003, 2006)
Womack had tremendous speed. He stole more than 20 bases in seven different seasons, and led the league three years in a row. The infielder was a late season pickup by the Cubs during their five-outs-away-from-the-World Series 2003 season. He hit only .235 in just over 50 plate appearances and didn’t make the postseason roster. He later returned to the Cubs for his final stint in a big league uniform in 2006. Womack ended his career with 363 stolen bases.

~Kyle Ryan 1991 (Cubs 2019-present)
The lefty reliever was probably the best lefty out of the bullpen for the Cubs in 2019. He was used often by Joe Maddon, appearing in 73 games. Other than one game when he inexplicably threw to first base when he could have easily thrown out the winning run at home plate, he was solid. He posted a 3.54 ERA and struck out 58 batters in 61 innings. He previously pitched for the Tigers.

~David Weathers 1969– (Cubs 2001)
Weathers came to the Cubs in a trading deadline deal in 2001, and was supposed to shore up their bullpen and lead them to the playoffs. Unfortunately the team fizzled in the closing weeks of the season. It wasn’t Weathers’ fault. He fulfilled his part of the deal, posting a 3.18 ERA in a Cubs uniform. He left as a free agent after the season. Weathers pitched 19 years in the big leagues for nine different teams (Marlins, Yankees, Blue Jays, Indians, Reds, Brewers, Mets, Astros, and Cubs).

~Ed Putman 1953-– (Cubs 1976-1978)
Putnam was the third overall pick of the 1975 draft by the Cubs. It was a pretty weak draft. Of all the first rounders, only Bump Wills (chosen two picks later) had anything resembling a good big league career. Putman was a catcher/first baseman, and the USC product played in exactly 22 games for the Cubs over two seasons (1976, 1978). He later had a cup of coffee for the Detroit Tigers.

~Dave Robertson 1889–1970 (Cubs 1919-1921)
The Cubs got Robertson from the Giants in exchange for troubled starting pitcher Shufflin’ Phil Douglas. Robertson became the Cubs starting left fielder in 1920, and hit .300 with 50 extra base hits and 17 stolen bases. For once, the Cubs sold high. They traded him to the Pirates the following season for Elmer Ponder. Robertson was out of baseball by 1923.

~Dick Harley 1872–1952 (Cubs 1903)
Harley was a starting outfielder for the Cubs in 1903, but he simply didn’t hit. In over 450 plate appearances, he managed only ten extra base hits, with a batting average of .231. Dick had some speed (27 stolen bases that season), but not enough to keep his job. He never played in the big leagues again. After his playing days, he became a college coach, including stints at Villanova, Penn State, and Pitt.