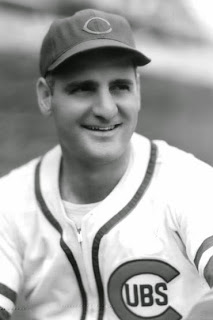 ~Zeke Bonura 1908–1987 (Cubs 1940)
Bonura was a track and field star as a teen, setting a record for the javelin throw. Zeke started off his baseball career with a bang too, averaging 20 homers and 100+ RBIs four seasons in a row for the White Sox. After going to the Senators and Giants, Bonura returned to Chicago to play for the Cubs in 1940. He no longer had it, hitting only four homers and driving in 20 over the last few months of the season. During the war he served in Algeria and helped organize a baseball league there for soldiers. Zeke Bonura is in the Italian-American Sports Hall of Fame.

~Randy Kramer 1960– (Cubs 1990)
Kramer spent exactly one month in a Cubs uniform, September of 1990. He appeared in ten games for the Cubs, including two starts. The right-hander had a respectable ERA (just a shade under 4), but he gave up three homers and walked twelve men in only 20 innings. The Cubs released him after the season. Kramer also pitched for the Pirates and Mariners.

~Larry Schlafly 1878–1919 (Orphans 1902)
Larry played only one month with the Cubs (then known as the Orphans) at the end of the 1902 season. He appeared in ten games — but he shared a spot in the infield each time with three future Hall of Famers: Tinker, Evers, and Chance. After leaving Chicago he became known as a fiery competitor who would do anything to get on base (he led the league in being hit by pitches). He was also one of the people who helped create the Federal League. Schlafly was considered the league’s best recruiter. He was only 40 years old when he passed away in 1919 of spinal meningitis.