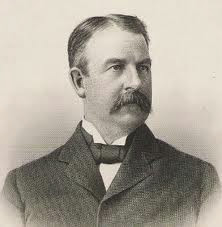 ~Albert Spalding 1850–1915 (White Stockings player 1876-1877, owner 1878-1891)
Spalding was already a four-time champion in Boston before he came to Chicago and convinced a few of his teammates to help stock the first National League team in Chicago. It was the beginning of a dynasty in Chicago. In Spalding’s first year with the White Stockings the pitcher won 47 games. But though Spalding was a great player, he was always a little ahead of his time. For instance, while he was still playing, he became the first “sissy” who insisted on wearing a glove. And he did it because he wanted to sell them at his sporting goods store. It worked. His business mind eventually took over, and he bought the team. There was simply more money to be made in ownership than in playing the game. He came up with several innovations (other than the glove), including spring training (in Hot Springs, Arkansas in 1886) and night baseball (which didn’t catch on in 1883). Al also created the world’s first league-wide salary cap, an idea that lives on today in many other sports, but ironically, not in baseball. Spalding is a Hall of Famer and a visionary, but clearly he was not a popular man because of the horrible way he treated his players. During a barnstorming world tour, one of his best players Ned Williamson was hurt in London. Spalding not only left him there, he refused to pay for his medical bills or his return passage to America. After the 1886 season, a season in which they lost the 19th century version of the World Series, Spalding decided that he had identified the problem. Spalding believed that alcohol was evil, and felt that his team simply had too many drunks. The Cubs certainly did have their share of drunks, and none was more obvious than their biggest star King Kelly. Kelly was known to show up drunk, drink during the game, and then get drunker still after the game. So, to clean up the team, King Kelly was the first player Spalding jettisoned. Kelly was sold to Boston for an unheard-of sum of money…$10,000. But Spalding was just getting started. Next, he got rid of the rest of the outfield. George Gore, a perennial .300 hitter, was traded to New York. Abner Dalrymple, their leadoff man and left fielder for their many pennant winners, was traded to Pittsburgh, along with one of their best pitchers, 31-game winner Jim McCormick. Only one “drunk” remained on the team, a future Hall of Fame pitcher named John Clarkson. He was sent away the following off-season. So how did the team fare after the drunks were moved out and the team was purified? They didn’t sniff the pennant for another nineteen years. It got so bad that the entire team quit to form a new league in 1890 (other than three players…Anson, Burns, and Hutchison). That signaled to Spalding that it might be time to step away from the game, which he did shortly after that.

~Jason Hammel 1982– (Cubs 2014-2016)
Hammel was signed as a free agent by the Cubs prior to the 2014 season and responded with the best year of his career. He was 8-5 with 2.98 ERA when the Cubs traded him along with Jeff Samardzija to the Oakland A’s in July. He didn’t pitch as well in Oakland, and became a free agent again, so the Cubs signed him again. In 2015 Hammel had a great first half, but slumped after the All-Star break, and really struggled in the playoffs. His 2016 season was much better. Hammel won 15 games, but was hurt toward the end of the year, and was kept off the postseason roster. The Cubs granted him free agency after the World Series. He signed with Kansas City.

~Milo Hamilton 1927–2015 (Cubs announcer 1955-1957, 1980-1982)
Milo is a Ford C. Frick Award winner in the “Scribes and Mikemen” section of baseball’s Hall of Fame. As a young broadcaster he worked for the Cubs alongside Vince Lloyd, but was moved out of the booth when Lou Boudreau became available. He went on to broadcast for many other teams including the White Sox, Braves, and Pirates. (Milo, of course, is most famous for his call of Hank Aaron’s 715th home run.) He came back to the Cubs in 1980, and at first enjoyed it. He was promised Brickhouse’s job when Jack retired, but when that time actually came, Harry Caray was brought in instead. Milo couldn’t stand Harry Caray, and especially didn’t like the way Harry broadcasted. In his autobiography, he wrote; “He rode the managers, he rode the players, it didn’t matter. He treated everyone the same way. In short, he was a miserable human being.” Milo offered another example of that in his book. When Milo was hospitalized for leukemia in 1982, Harry responded on the air that he “Couldn’t understand how a guy can take time off during the season. Unlike some other broadcasters I know, I’ve never missed a game.” Milo left town, landed in Houston, and broadcast games there until his retirement in 2012.

~Gordon Massa 1935–2016 (Cubs 1957-1958)
He had two great nicknames (“Moose” and “Duke”) and a lifetime batting average of .412, but not many people remember the Cubs career of Gordon Massa. Why is that? Probably because he only batted 21 times over a two-year period. Massa spent most of his career in the minors, where he hit only .257. Moose finally hung his spikes after the 1963 minor league season. He died just a few months before the Cubs finally ended their World Series drought.

~Len Rice 1918–1992 (Cubs 1944-1945)
Len was one of the backup catchers on the last Cubs team to win the pennant before the 2016 Cubs. He appeared in 32 games that season, and hit .232 in just over a hundred plate appearances. When the regulars came back from the war, Rice’s time in the big leagues was up. He played another four years in the minors before retiring from baseball.