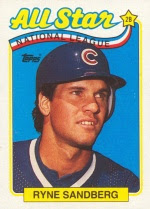 ~Ryne Sandberg 1959– (Cubs 1982-1994, 1996-1997)
He was destined to have a great nickname because he was named after the famous Yankees relief pitcher “Blind Ryne” Duren. Ryno was just a throw in to the Iván de Jesus/Larry Bowa trade with the Phillies. The Phillies had two other second base prospects who were pretty good (Juan Samuel, Julio Franco), but needless to say, neither one of them had the career Ryno had. He is in the Hall of Fame. Nicknamed Ryno for obvious reasons (not his similarity to the horned beast), Sandberg held the record for home runs by a second baseman when he retired. He was an MVP (1984), a ten-time All-Star, nine-time Gold Glover, seven-time Silver Slugger, and the most popular Cubs player of his era. After his playing career, he went back to Single-A ball to manage, and worked his way up to Triple-A. When the Cubs didn’t give him the big league manager job, he left the team to coach the Phillies. Ryno still holds the record for most hits by any player born in the state of Washington. He also scored more runs than any other Cubs player in the 20th century. (Photo: Topps 1991 Baseball Card)

~Brent Lillibridge 1983– (Cubs 2013)
The former White Sox utility man made the Cubs during spring training of 2013 when the Cubs suffered a few injuries. Unfortunately for Lillibridge, he didn’t exactly make the best of his opportunity. In 24 at-bats he got exactly one hit (an .042 average), and struck out nine times. By June he was in the Yankees organization.

~Jody Gerut 1977– (Cubs 2005)
The Cubs acquired the local boy (Willowbrook) from the Indians midseason. He was one of seven or eight players to get a shot at the left field job. One of those left fielders (Jason Dubois) was the player traded to Cleveland for Gerut. In his first 14 at-bats, Jody got one hit (an .071 average), and was shipped off to Pittsburgh for another possibility — Matt Lawton. Jody also played for the Padres and Brewers before hanging it up after the 2010 season.

~Ozzie Timmons 1970– (Cubs 1995-1996)
Timmons was the right-handed half of a platoon in left field during his two seasons in Chicago. He hit the ball pretty well (15 HRs and 44 RBI), but never really could claim the job full-time. The Cubs traded him to the Reds the following year. He also got cups of coffee with the Rays and the Mariners.

~Bob Collins 1909–1969 (Cubs 1940)
Born in Pittsburgh the year after the Cubs won the championship, Rip Collins, as he was known, was a not-so-youthful 30 years old when he got his first chance at the big leagues. He was one of three catchers who backed up starter Al Todd. His .208 average didn’t exactly wow his manager — one of the other backup catchers — Gabby Hartnett. Collins later got a very brief cup of coffee with the 1944 Yankees and that was the extent of his big league career.