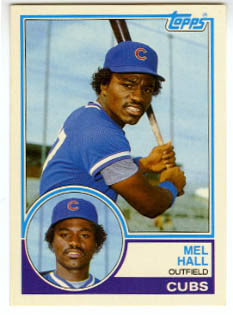 ~Mel Hall 1960– (Cubs 1981-1984)
Hall really burst onto the scene during the 1983 season. After getting a taste of the big leagues at the end of the ’81 and ’82 seasons, he won a job in 1983, and responded with a great year. Mel slugged 17 homers, hit .283 in just over 400 at-bats, and finished third in the Rookie of the Year voting. He was in the Opening Day lineup in 1984 too, and was on his way to a decent (if unspectacular) year when he was called into the manager’s office on June 13th. That’s when he found out he had been traded to the Cleveland Indians along with Joe Carter for pitcher Rick Sutcliffe. Sutcliffe led the Cubs to the playoffs, and Hall had three good, but not great seasons with the Indians, before being traded to the Yankees. Before his career was over, Hall had clubbed 134 homers in 13 big league seasons, and another 64 in Japan. But that’s only the baseball part of the Mel Hall story. There is a much darker side to Hall as well. After his baseball career ended, Hall was convicted of being a sexual predator, and was sentenced to 45 years in prison. (Photo: 1983 Topps Baseball Card)

~Mark Parent 1961– (Cubs 1994-1995)
Parent was an excellent defensive catcher and parlayed that into a 13-year big league career. But because he couldn’t hit very well (lifetime average .214), he never really claimed a starting position. He was a solid backup for the Padres, Rangers, Orioles, Pirates, Tigers, Phillies, and the Cubs. Both years he played with the Cubs were strike-shortened seasons. He hit six homers in 56 games. Parent went into politics in his native Canada after his playing career.

~Mike Garman 1949– (Cubs 1976)
Garman was the third overall pick in the 1967 draft by the Red Sox (right before John Matlack). He was acquired by the Cubs from the Cardinals for Don Kessinger after the 1975 season, and spent one full season in the Cubs bullpen. Garman had a few good years in the big leagues, including the year before (10 saves) and year after (12 saves) his time with the Cubs, but he couldn’t hack it in Chicago. He appeared in 47 games, and his ERA hovered around five. He was part of the package (along with Rick Monday) that brought Bill Buckner and Iván de Jesus to Chicago from Los Angeles.

~Gary Ross 1947– (Cubs 1968-1969)
Ross came up to the big leagues with the Cubs, and contributed as a member of the bullpen for parts of two seasons. He was traded to the Padres along with Joe Niekro in the Dick Selma trade, and pitched another eight seasons in the majors. Unfortunately for him, he pitched for some truly bad teams (Padres and Angels), and ended his career with a 25-47 record. One year with the Angels (1976), he pitched 225 innings with a 3.00 ERA, and finished with an 8-16 record.

~Vito Valentinetti 1928– (Cubs 1956-1957)
Vito’s big league career was delayed because he was serving in the military during the Korean War. When he returned he got a cup of coffee with the White Sox before moving to the other side of town. Vito was a right-handed reliever, and he had a fairly good season for the Cubs in 1956. He won six games and saved another with the Cubs, but was traded to the Dodgers for Don Elston the following May. That turned out to be a good trade for the Cubs. Elston became a key pitcher for the Cubs over the next seven years, and appeared in two All-Star games. Vito pitched for the Indians, Tigers, and Senators, but by 1960, his big league career was over.

~George McConnell 1877–1964 (Cubs 1914, 1916)
One of the last of the two-way players, McConnell both pitched and played outfield. He didn’t have a tremendous amount of success doing either with the Cubs. He was 4-12 as a pitcher, and batted .158 as an outfielder. His best season in the big leagues was the year between his two years with the Cubs. That year (1915), the spitballer pitched for the Chicago Federals, and won a league-leading 25 games. The slender 6’3 pitcher was nicknamed Slats.

~Gus McGinnis 1870–1904 (Colts 1893)
Gus went 2-5 with a 5.35 ERA in his half-season with the Cubs (then known as the Colts). He finished the season with Philadelphia, and won one last game. Gus never pitched in the big leagues again. Just eleven years after his final big league pitch, Gus was dead at the age of 33. 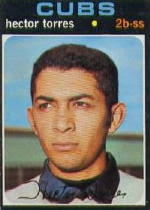 ~Hector Torres 1945– (Cubs 1971)
The Cubs acquired Torres in a straight shortstop for shortstop swap with the Houston Astros. The Astros got Roger Metzger in return. Torres hit .224 backing up Don Kessinger and Glenn Beckert in 1971. It was the Mexico native’s only season with the Cubs. Metzger, meanwhile, was the Astros starting shortstop for the next seven years, and won a Gold Glove. Torres was nicknamed La Malita. (Photo Topps 1971 Baseball Card)