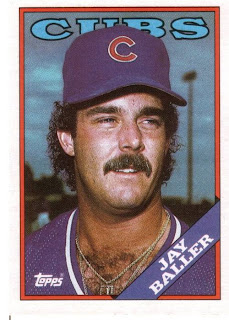 ~Bill Johnson 1960–2018 (Cubs 1983-1984)
He was acquired along with Dick Ruthven for Willie Hernandez (a terrible trade in retrospect) from the Philadelphia Phillies. Johnson was a September call-up for the Cubs in both the 1983 and 1984 seasons, but didn’t get a lot of opportunities to pitch. He appeared in 14 games and posted a 3.57 ERA. Hernandez went on to win the Cy Young Award.

~Dutch Meyer 1915–2003 (Cubs 1937)
On June 23, 1937, Dutch was called on to pinch run for Cubs catcher Gabby Hartnett in the sixth inning of a game against the Giants at Wrigley Field. On the next pitch he was eliminated at second base on a fielders choice groundout by Joe Marty. Dutch never played for the Cubs again. The second baseman re-emerged in the big leagues during the war as a backup for the Tigers, and for one glorious season, as the starting second baseman for the Indians (1945).

~George Riley 1956– (Cubs 1979-1980)
The lefty came up with the Cubs but didn’t pitch well. His ERA over two seasons was over five. He later pitched for the Giants and Expos. Riley won exactly one game in his big league career, and it wasn’t for the Cubs.

~Gene Clines 1946– (Cubs 1977-1979)
Clines was an excellent hitter, hitting .334 for the 1972 Pirates. But Gene was never too slick with the glove, and that hampered his playing time. When he joined the Cubs he was more or less a fourth outfielder. He hit well (.293 his first season), but never got more than 250 at-bats. The Cubs turned out to be his last big league team. After his playing career, Clines became a well-respected hitting coach — even logging some time on the staff of the Chicago Cubs.