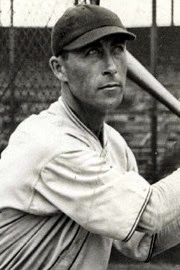 ~Norm McMillan 1895–1969 (Cubs 1928-1929)
Called “Bub” because of his southern origins, Norm McMillan’s most productive season came in 1929 with the Chicago Cubs when he hit .271 in 459 at-bats with 5 home runs and 55 runs batted in. He also had 13 stolen bases. That season Bub was involved in one of the stranger plays in baseball history. On Aug. 26, 1929, the Cubs and Reds were tied at 5-5 in the bottom of the eighth inning of a game at Wrigley Field, when McMillan hit an inside-the-park grand slam. The outfielder couldn’t find the ball in the bullpen. After the game, Cubs reliever Ken Penner picked up his jacket in the bullpen and found the missing ball in his right sleeve. McMillan was a 33-year-old well-traveled utility man and surprised everyone by winning the starting 3B for the Cubs in 1929, but he only managed 2 hits in 20 at-bats in the World Series. The following year Woody English took McMillan’s spot, and good ol’ Bub never played in the majors again. Following his career in baseball, McMillan owned and ran a drug store in his native South Carolina.

~Rey Sanchez 1967– (Cubs 1991-1997)
Sanchez was a slick-fielding infielder; probably one of the best in the game during his 15-year big league career. He started out with the Cubs and was a key contributor for most of the 90s. He didn’t have much pop in his bat, and that limited his time in the lineup, but his glove kept him in the big leagues for a long time. Ironically, the most famous moment in his Cubs career involved an error. Sanchez dropped an easy pop up one day, leading Harry Caray to memorably retort that “you’d think a guy from Puerto Rico wouldn’t have trouble with the sun.”

~Al Heist 1927–2006 (Cubs 1960-1961)
Heist was with the Cubs during the ill-fated College of Coaches era. One of those coaches in 1961 apparently liked him, because he got the bulk of playing time at center field during the 1961 season. Heist batted .255 with 7 homers. The Cubs left him unprotected in the 1962 expansion draft, and Houston picked him up. He didn’t play much with the Colt 45s in 1962, but that team actually finished higher in the standings than the 1962 Cubs. Al worked as a scout after his playing days, for the Astros, Cubs, Giants, and Padres.

~Charlie Pechous 1896–1980 (Cubs 1916-1917)
Charlie was a 19-year-old backup third baseman and shortstop for the Cubs in their first year at Wrigley Field, and stuck around to help a bit in 1917. He played his last game in the big leagues on September 30, 1917. Charlie stuck it out for six more seasons in the minors before hanging up his spikes at the ripe old age of 26.

~Roger Denzer 1871–1949 (Colts 1897)
Denzer had one of the greatest nicknames of all-time. His teammates called him “Peaceful Valley.” That nickname wasn’t given to him because he had a Zen-like approach to the game. He merely resembled the lead actor in a Broadway play named Peaceful Valley. Denzer was a right-handed pitcher for the Cubs (then known as the Colts) for one season and compiled a 2-8 record with a 5.13 ERA. He later also pitched for the Giants and the White Sox. Roger actually got the first official win in Chicago White Sox franchise history. 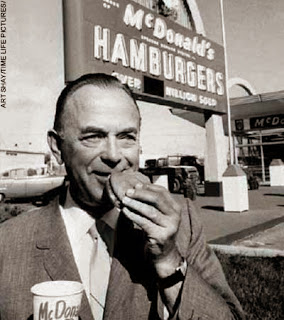 ~Ray Kroc 1902–1984 (Cubs fan 1902-1974)
He is one of the most famous entrepreneurs in history, the man who made the golden arches famous around the world, and he grew up in Oak Park–a die-hard Cubs fan. When he became a multi-millionaire he tried to rescue his favorite team from Wrigley family ownership, which he felt was ruining the team. He asked his good buddy George Halas to serve as intermediary with the Wrigley Family, to convince them to sell. At the time (this was the early 70s), Phillip K. Wrigley was a disinterested owner, barely paying attention to his team. Nevertheless, he refused to sell the Cubs to Kroc because he had made a deathbed pact with his father never to sell the team. Frustrated by his inability to buy his favorite team, Kroc settled on buying the San Diego Padres in 1974. He spent a fortune on the team and transformed them into a winner.When he died in January of 1984, the Padres pledged to dedicate the season to their beloved owner. If memory serves, that team did manage to make it all the way to the World Series that season. Unfortunately, the team they discarded on the side of the road on the way to that pennant was the team of Ray Kroc’s childhood: The Chicago Cubs.